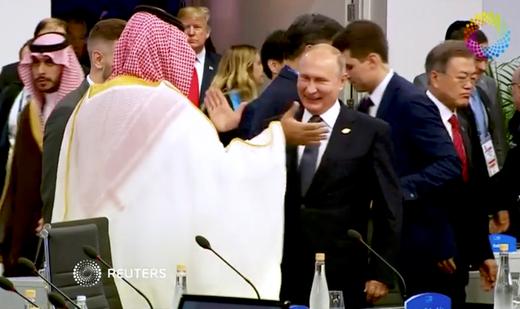 One of the press highlights of the weekend’s G20 summit was the enthusiastic high-five exchanged by President Vladimir Putin and Saudi Prince Mohammed bin Salman (an enthusiasm shared by no other leader). One New York Times journalist called it “stomach-churning“. The pair discussed cooperation on rebalancing the oil market and announced that they will expand their existing deal into next year, prompting an immediate surge in prices. German President Angela Merkel is pushing for an avoidance of escalation in the Sea of Azov, urging Putin during their G20 meeting to stick to the 2003 treaty that grants access to Ukrainian ships. They agreed to further four-way discussions on the issue. Putin told G20 reporters that the time has not yet come to return the Ukrainian sailors and naval vessels that Russia seized in the Kerch Strait last week. He claims that the boats seized had threatened to blow up the Russian bridge. The incident has renewed German parliamentary debate over the Nord Stream 2 pipeline. Merkel’s potential successor suggested that, whilst Germany would not go so far as to withdraw support, it could restrict Nord Stream’s gas flows. Major crises in Russia’s regional factory towns paint a truer picture of the economy than energy markets, reports the FT. “No money, no jobs, no hope.”

Russia is working on legislation to restrict the passage of foreign warships in the Arctic. Protests following the Georgian presidential elections are “exactly what Russia would have wished for”. A journalist for Russian state media was caught filming outside a British military cyberwarfare headquarters, prompting an alert. In a speech today, the head of MI6 will talk about Russia’s stance of “perpetual confrontation” with the West.

Russian leaders marked fondly the death of George HW Bush. Putin noted his work in strengthening Russian-US cooperation, and Prime Minister Dmitry Medvedev praised “the good memory of this outstanding man” in a personal note to his son. Soviet leader Mikhail Gorbachev marked Bush’s contribution towards the end of the Cold War and praised him as “a genuine partner”.