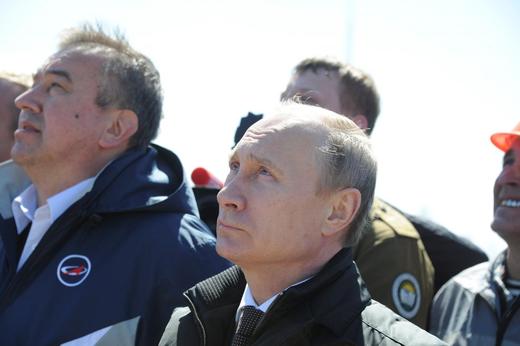 US Defence Secretary Ash Carter says Russia is intent on eroding national order, and though he said he regretted adding a further strain to US-Russia relations, also accused it of ‘nuclear sabre-rattling’ via modernisation of its nuclear arsenal, making nuclear threats to Denmark, and deploying nuclear-capable missiles to Kaliningrad.  ‘We do not seek a cold, let alone a hot war with Russia. But make no mistake: We will defend our allies,‘ he said.  NATO’s military commander says the organisation prefers to deal with President Vladimir Putin directly, than with the small inner circle that surrounds him, who are, he says, less ‘reasonable’; he also said that NATO believes this small influential group ‘will be with us for some time’.  Spanish authorities issued arrest warrants for several prominent and high-ranking Russian officials suspected to have ties to the mafia in Spain.  Estonia is speaking out against Russian military planes’ regular violation of its airspace, with the Defence Minister citing ‘incredibly reckless’ behavior on Moscow’s part that could potentially cause an accident with a civilian aircraft.  Japan will continue to aim for better ties with Russia at the 13th meeting between Putin and the Japanese Prime Minister later this week.  Foreign Ministry spokesperson Maria Zakharova says Moscow has become an increasingly popular destination for foreign delegations in the past year.

Russian hacker Nikita Kuzmin has been fined $6.9 million, and given a three year prison sentence, for developing a computer virus that affected one million machines globally.  Russia has filed a query with the US authorities for details of the detention and death of Russian citizen Igor Zyazin by US customs enforcement on the US-Mexico border.  UK-based fund manager Bill Browder told a UK parliamentary committee that at least $30 million of the tax money allegedly stolen in a Russian fraud case was laundered through luxury goods in Britain.  The Guardian has more details of the alleged spending spree.  Ella Pamfilova, the new head of the Central Elections Committee, is ‘clearly’ dedicated to changing Russia’s electoral process, says this piece, but what is her actual capacity to do so?

Russian-American journalist Anna Nemtsova discusses the drastic changes in Russian perceptions of foreign correspondents in the past two decades, from once being seen as heroes to now having equal status with ‘foreign agents or spies’.