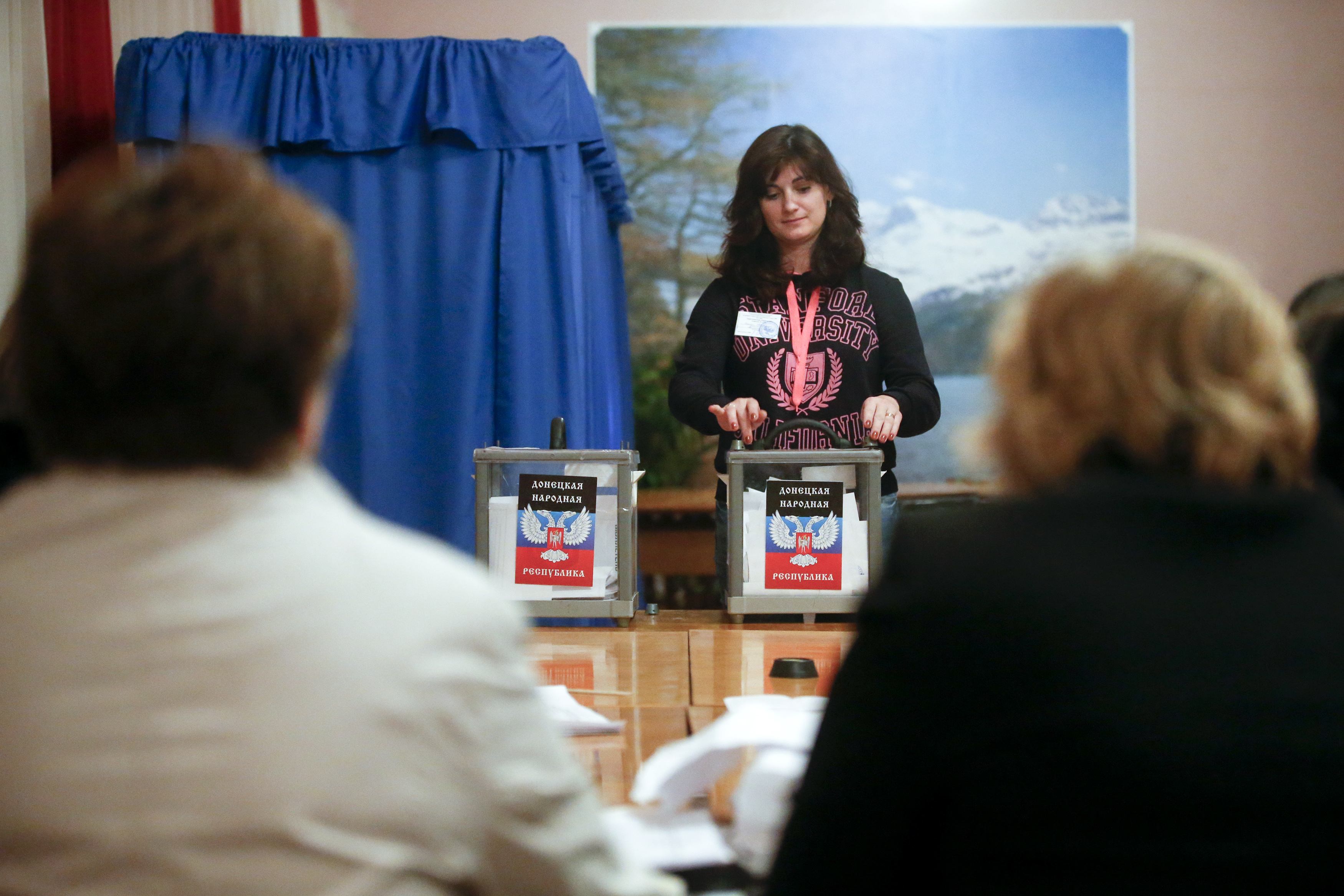 President Vladimir Putin has not yet formally recognised the validity of the separatist elections held in eastern Ukraine over the weekend, but a spokesman for German Chancellor Angela Merkel said it was ‘incomprehensible’ that other ‘official Russian voices’ had done so.  Merkel herself suggested that Europe may need to intensify sanctions ‘if the situation worsens’.  NATO’s top military commander says Russian troops are still training and equipping separatists in Ukraine; that the border between the two countries is almost completely porous; and that recent Russian incursions into European airspace have been increasingly ‘provocative’.  U.S. Vice President Joe Biden ‘went out of his way to correct himself’ yesterday after describing Russia as having ‘invaded’ Ukraine.  Putin will speak in Moscow’s Red Square today to mark National Unity Day – only 50% of Russians know that the day is held in celebration of the Bolshevik Revolution, according to a Levada Center Poll.  The nationalist community will hold its annual march in Moscow and other Russian cities to celebrate, though the Moscow event ‘has been pushed to the edge of the city’, a reflection of the Kremlin’s ‘long-term ambiguous relationship with […] nationalists‘.

Russia has dropped seven places lower than in the previous year in the Prosperity Index, an annual assessment of global wealth and wellbeing – coming just four places above Iraq.  Russia’s economic slowdown is showing side effects in neighboring countries such as Kazakhstan, Uzbekistan, Georgia and the Kyrgyz Republic, for whom Russia is a key trading partner and financier.  It remains unclear as to whether Russia’s no-show for a meeting planning nuclear security for 2016 was due to tensions over Ukraine, or a boycott of the nuclear question itself.  The Washington Post says the no-show could be a ‘serious blow‘ to President Barack Obama’s efforts to combat nuclear terrorism. Vladimir Putin has awarded a posthumous Order of Honour to Christophe de Margerie, the chief executive of French oil company Total, who was killed in a Moscow plane crash last month.  A six-foot-tall monument to Apple founder Steve Jobs was dismantled in St. Petersburg after the company’s current CEO, Tim Cook, came out as gay.

The coach of the Russian football club FC Rostov was ‘shocked’ at the reception of his racist comments about ‘dark-skinned’ players, apologising after several of his team members threatened to strike.

PHOTO: A member of a local electoral commission opens a mobile ballot box at a polling station after voting day in Donetsk, November 2, 2014. Pro-Russian rebels voted in an election to set up a separatist leadership in eastern Ukraine on Sunday, taking the war-torn region closer to Russia and defying Kiev and the West, as shelling continued across the territory. REUTERS/Maxim Zmeyev