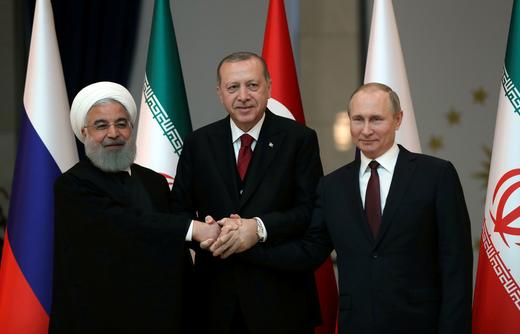 Sergei Naryshkin, the chief of Russia’s foreign intelligence agency, said that current relations with the US amount to “a return to the dark times of the Cold War”. Defence Minister Sergei Shoigu backed him up, accusing the US and its allies of using Russia to boost military potential. At a meeting of the UN today which it has convened especially, Russia will challenge the UK’s assertion that it was responsible for the nerve agent attack on former spy Sergei Skripal. The UK slammed Russia’s request for a joint inquiry into the poisoning, which was voted down by OPCW (the international chemical weapons watchdog), but Russia argued that the sheer number of abstentions from the vote is proof of uneasiness with Britain’s position. Putin met with his Turkish and Iranian counterparts in Ankara yesterday for the most high-level talks on ending the Syrian war in 5 months; many see the meeting as “more an exercise in public relations than substantive policy decisions”.

NATO Secretary-General Jens Stoltenberg said that it is not the alliance’s intention to isolate Russia in the wake of the Skripal attack, and that it seeks to have a better relationship, but that it must crack down on “a pattern of behaviour which we have seen over many years”. Russia’s missile testing in the Baltic Sea yesterday alarmed Latvia who called it a “provocative”, although legal, action, and partly shut down its commercial airspace in response; Sweden also subsequently assigned a danger area to the southern Baltic Sea. New research shows that half of Russian PhDs want to emigrate to seek better employment opportunities, continuing the brain drain of highly qualified workers that has already doubled since 2013.

Reporters Without Borders (RSF) has highlighted a trend of Russian state television channels playing down or ignoring bad news, a claim which gained popularity following the deadly Kemerovo shopping mall fire in Siberia which, RSF says, was “played down” by the media. Just two weeks after the Kemerovo fire, another fire at a mall in Moscow has killed at least one person.