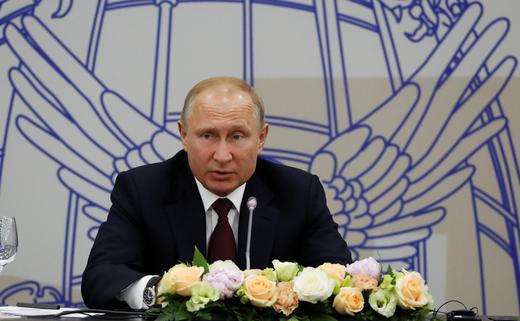 President Vladimir Putin signed new legislation that was drawn up to counter US sanctions imposed on Russia in April, giving him the power to sever ties and trade with unfriendly countries; it fell short of some of the more extreme measures initially proposed. Appearing in an interview on Australian television yesterday, Putin offered his views on a number of topics. Ahead of his first bilateral trip to Western Europe in over a year, he said that Russia is not seeking a divided EU, but rather wishes to see the flourishing of its “most important trading and economic partner”. He refuted the furore over Yevgeny Prigozhin, an ally of his who has been accused of funding Internet trolling operations, by comparing him to George Soros who, Putin said, “intervenes in things all over the world”, and ridiculing the notion that “a restauranteur from Russia could influence elections in the United States”. Putin also praised his government for having created “very good conditions” for the development of the economy, “and we will definitely do it”. The Kremlin is planning to inject $81 million into Promsvyazbank, which is currently lending to sanctioned businesses; inflation is expected to stand at no more than 3.2% by the end of this year. Cossacks set to patrol the upcoming World Cup say they will report same-sex couples to police for kissing in public.

Moscow’s City Court sentenced Ukrainian journalist Roman Sushchenko to twelve years in prison after convicting him of spying; Kiev and rights activists say the case is politically motivated. Ukrainian journalist Matvei Ganapolsky, one of the people who apparently appeared on the Russian hit list uncovered by Ukraine’s intelligence services last week, says he will not try to hide; Yevgeny Kiselyov, a former prominent Russian television anchor, also on the list, said “I despise Putin. I am not afraid of him.” Dozens of artists are calling for the release of Ukrainian filmmaker and dissident Oleg Sentsov, currently serving a 20-year sentence in Russia. A lawyer for Russian journalist Kirill Vyshinsky, currently being held in Ukraine on suspicion of treason, said his home had been raided by Ukrainian police. A prominent opposition activist in the Altai Krai region who accused local authorities of corruption has fled Russia after being investigated for financial fraud charges and scheduled to be put into a psychiatric ward.

Strategic interaction with China is a top Russian foreign policy priority, says the Kremlin.  A new survey indicates that a majority of Russians are unhappy with the continued office of Prime Minister Dmitry Medvedev. Russian state television stands accused of photoshopping a smile onto Korean leader Kim Jong-un’s face during his meeting with Foreign Minister Sergei Lavrov last week. Metals, freight, and shipping magnate Vladimir Lisin is now Russia’s richest person, with a fortune of $20 billion.