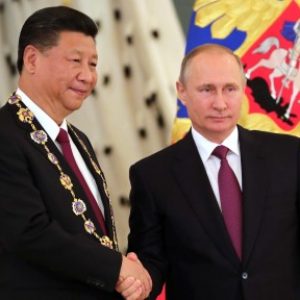 More than twenty agreements have been signed during the visit of Chinese President, Xi Jinping, to Moscow, during which he was also showered with praise by President Putin, who presented him with the Order of St. Andrew, the highest state award. The agreements include a plan to inject a further $1 billion into the capital of the Russia-China Investment Fund. Additionally, state development bank VEB signed an agreement by which it should receive $882.35 million from China Development Bank for innovations. The two sides have urged the US to try to cool tensions with North Korea over its controversial missile test. They offer ‘a diplomatic double act that contrasts sharply with Donald Trump’s crude threats and pressure tactics’, says this article. Of the upcoming meeting between Putin and Trump, due to take place on Friday, which has been confirmed to be a fully-fledged bilateral meeting, observers are noting that Trump could well be ‘out gamed‘ by his Russian counterpart. The Washington Post agrees that the US President is lacking in options.

Germany is apparently ready for the prospect of Russian interference in its general election in September, with the aim of reducing faith in the German democratic process, rather than pushing a particular candidate. Serbia’s new Prime Minister Ana Brnabic has asserted that, should Serbia be forced to choose between closer ties with Russia and joining the European Union, it would take the European path. The Kremlin is, apparently, ‘skeptical’ about this. Once it has finalised an agreement with Turkey and Iran, Russia may deploy its military to police the borders of planned de-escalation zones in Syria within two to three weeks. Democratic Republic of Congo is apparently in talks with state-owned bank VTB over potential investments of up to as much as $1 billion. Russia is opposed to any changes to the current OPEC deal, believing any deeper oil production cuts would send the wrong signal to the market.

A strict new surveillance law, introduced last year as part of controversial new anti-terror legislation and due to come into force next year, may be delayed until 2023 to give technology firms (who are firmly against the amendments) time to accommodate the necessary changes. Shares in Russian telecom providers rose accordingly with the news. As of today, it is slightly easier to buy alcohol in Russia.