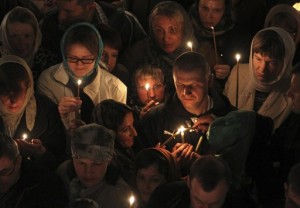 As some protesters await trial and others remain under house arrest for taking part in protests on Bolotnaya Square on the eve of Vladimir Putin’s inauguration last May 6, the opposition are preparing to hold another major demonstration today.  A small pre-march rally of a reported 400-1,000 people was held in Moscow last night, calling for the release of those detained. No one was arrested.  The main demand of today’s march, according to the Opposition Coordination Council, ‘is to immediately release all Bolotnoye prisoners and other political prisoners’, and organisers are expecting a bigger event than the 30,000-strong protest that has been sanctioned.  According to a new Levada Centre poll, more than half of Russians believe that the judge overseeing the trial of Alexei Navalny will face government pressure, and almost half believe that he will be convicted.  Over 4 million people took part in a late-night mass on Saturday to celebrate the Orthodox Easter Sunday, which was yesterday, and which provided Vladimir Putin with an opportunity to express gratitude for the ‘selfless labour’ and ‘personal contribution’ of Patriarch Kirill in ‘solving the most pressing issues of culture’.  The father of jailed Pussy Riot member Nadezhda Tolokonnikova insists that his daughter is a more mature and wiser person as a result of her imprisonment.

A volunteer-run ecological support group that protects cranes is the latest organisation to have been branded a ‘foreign agent’ by prosecutors in the Amur Region.  The Kremlin says it doubts the authenticity of a letter posted online, supposedly written by a group of doctors, urging Vladimir Putin to allow a last slew of U.S. adoptions of Russian children.  Lithuania is seeking a reduction in the price it pays Gazprom for natural gas.  A senior official at Moscow’s City Hall was found dead last week in a ‘contract-style’ shooting at his apartment building.  The funeral of Boris Berezovsky will be postponed indefinitely, apparently to keep it private.  The WSJ documents what it says has been the major failure of Vladimir Putin’s career: to boost Russia’s population with social incentives.

The popularity of dashboard cameras in Russia – usually used to prevent insurance fraud – has unearthed a compilation of motorists’ good deeds.  Hunters in the Ural Mountains have discovered the wreckage of a plane that went missing a year ago.

PHOTO: Russian Christian Orthodox worshippers light candles as they wait for a holy Easter service at the Church of St. Peter and Paul in Karlovy Vary May 5, 2013. The spa town of Karlovy Vary has a large number of Russian residents and is also a popular tourist destination for visitors from Russia. (REUTERS/David W Cerny)