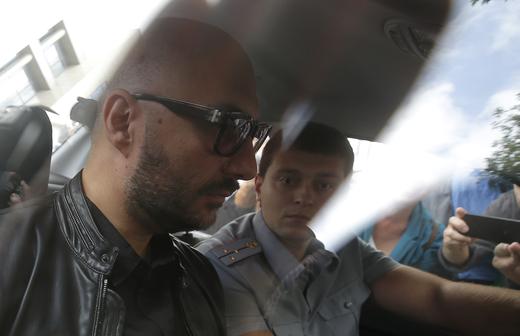 Foreign Minister Sergei Lavrov told US Secretary of State Rex Tillerson that Russia is planning to sue over the US’ treatment of Russian diplomatic property which, he says, is in violation of international law. The US State Department disputes this claim because, it says, under international law, countries can only establish diplomatic posts when the host country consents. Politician Nikita Isaac said Russia should release its compromising material on Donald Trump in retaliation. “Of course we have it!” he said. President Vladimir Putin hinted that Russia may impose further diplomatic staff cuts on the US, in a bid to achieve “full parity”. President Vladimir Putin says there is no censorship or official pressure behind Serebrennikov’s arrest, and the fact that the director used to receive state funds is proof that there are no “intentions to rein in his creative activity”. Serebrennikov stands accused of misspending $1.1 million in state funds allocated to him. In response to a journalist’s question about whether or not he was “disappointed” by his relationship with Donald Trump, Putin said, “he’s not my bride and I’m not his groom”. Putin also quipped that it’s tricky to have dialogue “with people who confuse Austria and Australia”.

Rosneft says it has not received any “peaceful” proposals from Sistema towards a solution of their legal battle, in which Sistema currently owes it $2.4 billion. Putin himself says he met the heads of both companies and is counting on them to reach a “peaceful”, out-of-court settlement. Russia has chosen VEB Capital as the investment firm that will advise it on the privatisation of a controlling stake in United Grain Company. For anyone concerned about Putin’s recent bragging about Russia’s advances in the field of artificial intelligence (such as Elon Musk), don’t worry, says Bloomberg, because “Russia is awful at commercializing and promoting technological advances.”

The former governor of the Kirov region, Nikita Belykh, is pleading not guilty to charges of bribe-taking; his trial began in Moscow yesterday.

PHOTO: Russian theatre director Kirill Serebrennikov (front), who was accused of embezzling state funds and placed under house arrest, sits in a car as he is escorted after a court hearing in Moscow, Russia. REUTERS/Maxim Shemetov