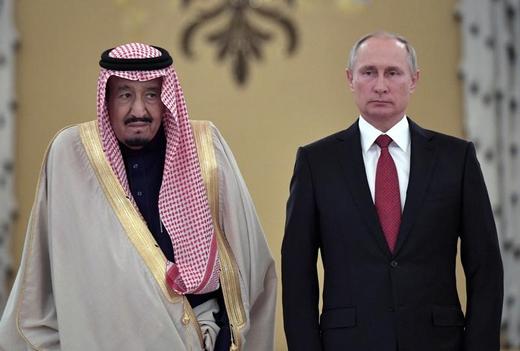 The news is flooded with stories covering various angles of Russia’s cooperation with Saudi Arabia following President Vladimir Putin’s momentous meeting with King Salman, during which the two cemented a key relationship for global energy and the power balance in the Middle East. Salman is the first Saudi monarch ever to visit Russia. The pair agreed on billions of dollars worth of investment deals and vowed to keep working on the development of relations. The total value of deals closed in business, aerospace, and energy, is around $3 billion. Discussion included topics such as possible nuclear cooperation, collaboration on lowering the oil price, and joint science projects. TASS has a round-up of salient points. The New York Times calls the meeting “groundbreaking”, marking a thaw in relations that have been tense since the Cold War, and says it points to Russia’s growing Middle Eastern clout. Police in Moscow raided the offices of Open Russia, Mikhail Khodorkovsky’s civic organisation yesterday, as well as the homes of the parents of its employees, with one source suggesting that this shows that the authorities are nervous about protests this weekend. Police have been ordered to “act very harshly” against any protesters gathering for Putin’s birthday tomorrow. Opposition leader Alexei Navalny’s campaign manager, Leonid Volkov, was released from detention on October 5, only to be detained again within hours of his release; another of his staffers, Anastasia Deineka, was detained on the same day in Rostov-on-Don.

Russian energy and aluminum company EN+ is planning a $1.5 billion IPO in London and Moscow. The Wall Street Journal is claiming that hackers working for the Russian government stole confidential material from an NSA contractor’s home computer, and implicates antivirus software made by Kaspersky Lab. This piece points out the WSJ’s lack of detail will likely not help Kaspersky Lab’s case, given the current level of suspicion in the US about the company with regard to Russian hacking. Russia is suspected of having caused interruptions in Latvia’s communications network ahead of its war games last month, apparently in a test of its cyber attack skills. The Defence Ministry is going to ban Russian soldiers from uploading location-sensitive information to the Internet.

Happy Birthday Vladimir Putin, here’s a gold-plated iPhone. The Washington Post reviews Masha Gessen’s new book: “You don’t need to agree with Gessen’s inflammatory label to find her book a sad, compelling indictment of the country where she was born, a country so traumatized by its monstrous past that it seems intent on repeating it.”

PHOTO: Russian President Vladimir Putin (R) and Saudi Arabia’s King Salman attend a welcoming ceremony ahead of their talks in the Kremlin in Moscow, Russia October 5, 2017. Sputnik/Alexei Nikolsky/Kremlin via REUTERS