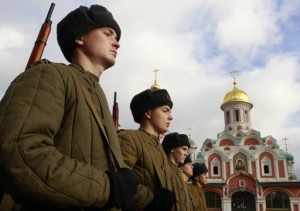 President Vladimir Putin has fired Defense Minister Anatoly Serdyukov, and replaced him with Moscow Governor Sergei Shoigu.  The prosecution of 19 people suspected of being involved in violent clashes during May’s anti-Putin rally is apparently part of an attempt to prove ‘a grand conspiracy instigated by financiers, organizers and activists’ that will implicate Leonid Razvocchayev and Konstantin Lebedev, according to suspects’ lawyers.  Foreign Minister Sergei Lavrov says that Moscow is supplying arms to Syria, but only through Soviet-era contracts meant to boost defense against external threats.  A report in Germany’s Der Spiegel magazine alleges that wealthy Russians would be the main beneficiaries if the E.U. were to bailout Cyprus due to its being a popular offshore tax haven; the Cypriot government has rejected this claim.  This piece looks at Russia’s crackdown on rubber bullet guns and the stigma attached to them due to their being seen as increasingly popular within the migrant population.  Russian observers are gearing up to monitor the U.S. general election, which begins today.  Russia wants the United Nations to improve its international nuclear disaster notification mechanism.

Patriarch Kirill is to begin a trip to the Holy Land this Friday, sparking the Israeli foreign ministry to laud it as ‘the most important visit since Pope Benedict XVI’.  Russia’s services industry grew at its fastest rate in 17 months last month, and inflation is continuing to increase for the fifth month in a row, with no signs of letting up.  This piece wonders whether Dmitry Medvedev could have had anything to do with the releasing of one of the three initial Pussy Riot prisoners.

Gazprom’s sales in Europe have declined, underscoring its plans to expand into Asia.  The owner of the missing gold-laden freighter Amurskaya has been arrested on suspicion of negligence.  Moscow’s new Mercury City tower, at 339m, is now the tallest building in Europe.