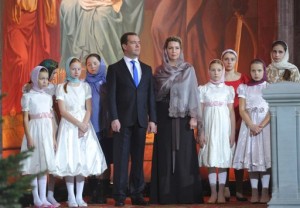 President Vladimir Putin marked the Orthodox Christmas with a message to believers, praising the holiday’s ‘light of belief, hope and love’.  Patriarch Kirill has urged Russians to adopt in the wake of Putin’s anti-adoption law, and has urged the Kremlin to be moderate in new legislation aimed at punishing religious offenders.  Prime Minister Dmitry Medvedev has given his approval to a ‘roadmap’ for a special program to promote competition and improve antimonopoly policy.  Ukraine’s President Viktor Yanukovych canceled a scheduled visit to Moscow last month, claiming that his country was not ready to commit to joining Russia’s customs union with Belarus and Kazakhstan.  The new law that classifies beer as an alcoholic beverage, thereby preventing its sale at kiosks, is receiving mixed responses, although ‘some people whose businesses will suffer said they supported the government’s goals’ with regard to reducing alcohol consumption.  Ellen Barry reports on some of those involved in last year’s initial wave of protests, and the ‘despair’ they feel at having ‘turned back into Internet hamsters’ in the wake of Putin’s crackdowns.

The President of Radio Free Europe has written to the Wall St Journal, explaining his reasoning behind the station’s reconfiguration in light of new government pressures, in particular the move to expand digital-media efforts, and denies that the changes were implemented in order to please the Kremlin.  Russian tycoon Sergei Polonsky has been arrested in Cambodia after allegedly threatened and imprisoned several local sailors.  The government is using state-backed incentives to ‘raise the prestige of the worker’, but low salaries and a ‘staggering’ wealth gap mean Russia’s workers require strong support, says this piece.  Aleksandr Golts claims that ‘Russia today is the main international warrior not for the people, but for authoritarian and totalitarian rulers – in Syria, North Korea, and Iran.’

A 43-year-old man has died in suspicious circumstances at a police station in Moscow.  Gerard Depardieu has met with Vladimir Putin to receive his new Russian passport, as Brigitte Bardot threatens to follow in his footsteps over French animal cruelty.