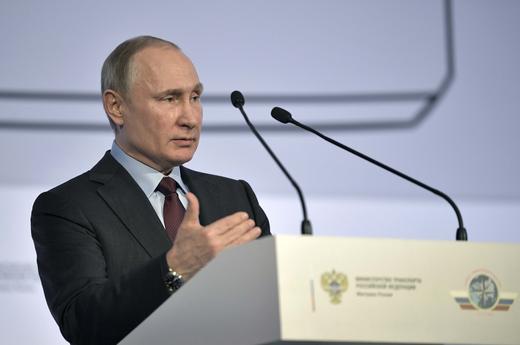 A Russian military transport plane crashed in Syria yesterday, killing everyone on board (initially 32 deaths, later updated to 39), with a technical fault likely to blame. The UN blamed both Russia and the US for large scale civilian deaths in Syria last year. The Syrian opposition is accusing Russia of attempting to force “demographic changes” with its tactics in eastern Ghouta. President Vladimir Putin suggested that the Russian nationals accused by the US of election meddling could be prosecuted at home, if they are found to have broken Russian law. The Central Bank will spend roughly $1 billion on a boost for the financial health of B&N Bank, the lender it already had to rescue last year. This op-ed by former Foreign Minister Igor Ivanov writes that Vladimir Putin’s state of the nation address was misunderstood by the West: “Moscow has certainly done its part to meet the West halfway since the end of the Cold War […] Russia does not intend to threaten anyone.”

Foreign Ministry spokeswoman Maria Zakharova says accusations that the Kremlin is responsible for the mysterious illness affecting former spy Sergei Skripal are “groundless” and that the UK should investigate before blaming Russia; Kremlin spokesman Dmitry Peskov called the incident in which Skripal was found unconscious due to suspected poisoning “tragic”. The Guardian has compiled a video explainer on Skripal’s professional history; he confessed to being a double agent in 2004 and was given 13 years in prison for treason. The richest Russian on this year’s Forbes’ World Billionaires List is owner of steelmaker NLMK, Vladimir Lisin, who appears on the list in 57th place with an estimated net worth of $19 billion; Severstal chairman Alexei Mordashov came just behind him. The list includes 103 Russian names.

A poll by state-run VTsIOM found that 82% of Russians believe in gender equality at home and that spouses should make key decisions together. Sports Minister Pavel Kolobkov reacted angrily to the Oscar win of Icarus, a documentary about doping in Russian sports, quipping that it should be classed as a fantasy film instead.