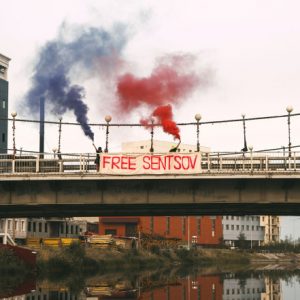 Two members of the feminist punk collective Pussy Riot, Maria Alyokhina and Olga Borisova, have reportedly been detained in Siberia, near the prison where Ukrainian director Oleg Sentsov filmmaker is being held, on charges which are believed to be politically motivated. Alexei Navalny’s presidential campaign is running into difficulties, as activists volunteering for him had an altercation with the police in Kostroma during a public speaking event on the weekend, and, in the city of Murmansk, seven volunteers were held after distributing flyers. During a visit to Warsaw, former Georgian president Mikhail Saakashvili has warned that ‘there is a serious opposition rising up inside Russia’ and that as a result of tensions with the West, Putin will inevitably face ‘full international isolation’. A man in Sochi has been convicted of offending religious believers’ feelings after reposting a number of satirical images of Jesus Christ, an indicator, this article says, of the tightening of rules on religious speech. With the presidential elections looming, the authorities apparently plan to unveil a spate of healthcare reforms, which aim to reduce waiting times twelve-fold, in order to woo voters.

In response to the new sanctions signed into law last week, Russia reportedly hopes to ween itself off using US payment systems and the dollar as a settling currency as quickly as possible. The German Marshall Fund’s Alliance for Securing Democracy, an organisation created to monitor, and deter, Russian attempts to undermine democracy, has reported a surge in the use of the hashtag #ResignPaulRyan on Twitter in the past 48 hours, as an apparent result of efforts by Russian-linked bots and trolls. Indonesia is not deterred by US and European sanctions against Moscow, viewing it as an opportunity to develop bilateral trade; it plans to barter coffee and palm oil amongst other commodities for 11 Russian-made Sukhoi fighter jets.

Putin’s holiday snapshots invariably elicit sarcasm in the Western press; but they still publish them in full, notes Bloomberg’s Leonid Bershidsky: ‘Few heads of state could boast of similar success with their government news products’. The Russian military is winning its International Army Games.

PHOTO: Maria Alyokhina and Olga Borisova, members of the Russian punk band Pussy Riot, hold flares and a banner on the bridge outside the prison colony in Yakutsk, Russia. (AP)