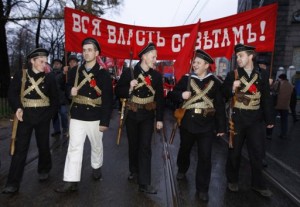 A Moscow court has ruled that the pretrial detention of Leonid Razvozzhayev was legal.  Rejecting a complaint filed by his lawyers, the court also ruled to keep Razvozzhayev in detention, where he has been since being kidnapping in Ukraine.  Human rights activist Commenting on the news of opposition activist Taisiya Osipova’s failed appeal against her eight year jail sentence, Lev Ponomaryov said ‘This again convinces me that our courts are not only unjust, but cruel.’  The Kremlin responded to news of U.S. President Barack Obama’s re-election ‘very positively’.  Prime Minister Dmitry Medvedev said ‘I am glad that the man who considers Russia the number one enemy will not be president.’  Foreign Minister Sergei Lavrov said he would not question the results of the American election, although he did make reference to ‘violations of voters’ rights’; and that he would continue to work with Barack Obama’s new administration.  The chairman of the Duma’s International Affairs Committee says Obama must reignite the reset policy if he wants to improve Russian-American relations.  America’s ambassador to Russia, Michael McFaul, says that the administration’s ‘basic strategy will not change’.

Prime Minister Medvedev announced that Russia will lend Vietnam $10 billion to help it build its first nuclear power plant.  A new report published by the Henry Jackson Society in London ‘aims to raise the profile’ of the case of Igor Shuvalov and his 2004 investments that are drawing accusations of corruption.  The corruption case against Anatoly Serdyukov is progressing.