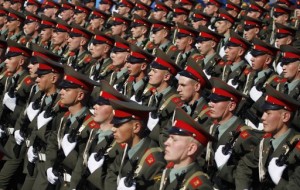 Deputy Prime Minister Vladislav Surkov has been ousted from his post by President Vladimir Putin, reportedly at his own request, and in connection with his waning influence in the Kremlin.  According to Putin’s spokesman, Dmitry Peskov, the move is ‘of his own volition.  It’s to do with the fact that decrees were not carried out,’ and the Kremlin as yet has no information on his future career plans.  Surkov is the third official to leave the cabinet of Prime Minister Dmitry Medvedev in a year, with analysts suggesting that it is only a matter of time before Medvedev will be ‘devoured‘ also.  Surkov, often referred to by his nicknames, the ‘grey cardinal’, or ‘the puppet-master’, is considered to have held enormous influence in the Kremlin in the earlier days of his 13-year political career; the Moscow Times compiled five facts about him, including his former position as an employee of Mikhail Khodorkovsky.  Garry Kasparov commented that Surkov’s dismissal indicates Putin is favoring ‘murderers’ over ‘thieves’.  The United States is concerned that Russia may be planning to sell an air defence system to Syria.  In his speech at a parade marking the 68th anniversary of victory in World War II, Putin touted Russia as a leader in ‘strengthen[ing] global security’.

The leaders of two prominent rights groups, For Human Rights and the Moscow Helsinki Group, say the Kremlin is trying to force the closure of Russia’s independent NGOs.  The Kirov offices of supporters of Alexei Navalny have been searched following a tip that they may have been housing extremist propaganda materials.  Businessman Pavel Spot was arrested yesterday on suspicion of ordering the fatal beating of investigative journalist Igor Domnikov in 2000.  Business ombudsman Boris Titov wants over 100,000 entrepreneurs currently serving prison sentences in Russia for white-collar crimes to be released.  Despite financial reforms, the Kremlin has failed to turn Moscow into an international financial center, says the FT, prompting analysts to comment that worries about Russian stocks – among the world’s cheapest – are overstated.  Vladimir Putin has signed a new law banning government officials from owning bank accounts and other assets abroad.

Boris Berezovsky was buried in Surrey, England yesterday.  Investigators in the Boston bombing inquiry are paying special attention to Tamerlan Tsarnaev’s six-month Russia visit, although the effects of his visit on his politics as yet remain unclear.

PHOTO: Russian servicemen take part in the Victory Parade on Moscow’s Red Square May 9, 2013. Russia commemorates the 68th anniversary of the Soviet Union’s victory over Nazi Germany on May 9. REUTERS/Maxim Shemetov