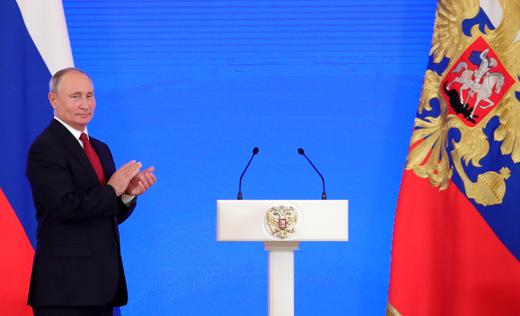 The US Treasury announced new sanctions on nine Russian entities in retaliation for Moscow’s annexation of Crimea. Businessman Yury Kovalchuk, a close ally of President Vladimir Putin, is affected via a company linked to Bank Rossiya, as is a hotel investment on Crimea’s southern shore, and FSB officer Andriy Sushko. Further sanctions may be imposed in relation to the construction of the Nord Stream 2 pipeline. Russia’s embassy in Washington responded to the new measures, saying it fully expects “to find a new round of sanctions under the Christmas tree,” and says that it does not know what the US is trying to achieve. Major oil companies are continuing to clash with Russia’s largest oil producers as they seek to renegotiate contract terms to insulate them against the effects of sanctions. The disputed terms reportedly include non-dollar contracts and penalties for non-payment. The Kremlin is boosting its domestic poultry production as a safeguard against US food sanctions. Ukraine’s OSCE representative says that Russia is continuing to violate the Minsk agreements and attempting to seize more territory in Donbas, eastern Ukraine. Elections to be held there this Sunday are seen as an attempt to legitimise Russia-backed control in the region.

Protests in Russia have tripled this quarter, year-on-year, largely due to public opposition to the Kremlin’s pension reforms. In an interview summarized here by Meduza, a former employee of catering magnate Evgenvy Prigozhin (aka “Putin’s Chef”) claims that it was Prigozhin’s idea for the Internet Research Agency (aka the “troll factory”) to meddle in the 2016 US presidential election. He also discusses several ways in which Prigozhin coordinated “stunts” to damage catering competition, such as faked food poisoning and paid protests.

Almost half of Russians believe that their country won World War I. A Moscow square has been named after British double agent Kim Philby.