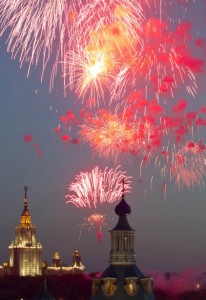 Prime Minister Dmitry Medvedev has appointed Sergei Prikhodo as a replacement First Deputy Chief of Staff for Vladislav Surkov, who was ousted from his post.  After Vladimir Putin praised Russia’s soldiers as ‘the liberators of Europe’ at the Victory Day parade in Red Square yesterday, over 8.5 million Russians attended Victory Day celebrations across the country.  (The Washington Post has some images.) The only reported detentions were of roughly 40 migrants, a result of document checks by police during festivities.  Putin also touted Russia as a guardian of global security, and vowed that Russia would ‘do everything in our power’ to prevent any future outbreak of war.

U.S. Secretary of State John Kerry says he would ‘prefer that Russia not supply’ Syria with assistance in the forms of arms deals.  British Prime Minister David Cameron and President Vladimir Putin, who each support opposing sides in the Syria conflict, are meeting in Sochi today to discuss potential solutions.  Orthodox Church head Patriarch Kirill is on an official visit to China.  As part of its role in the Cyprus bailout, Russia says it will extend the terms of its current €2.5 billion loan, cutting interest and extending the maturity by two years.

Several St. Petersburg-based media outlets, including Novaya Gazeta and Ekho Moskvy, have been attacked by hackers and are still struggling to get their services back online.  Investigators looking into this week’s cyber bank theft, which saw $45 million disappearing from two Middle Eastern banks, have linked emails to a money laundering operation in St. Petersburg.

PHOTO: Fireworks explode in the sky above an Orthodox church with Moscow State University main building (L) in the background during a display as part of celebrations for Victory Day in Moscow May 9, 2013. (REUTERS/Maxim Shemetov)