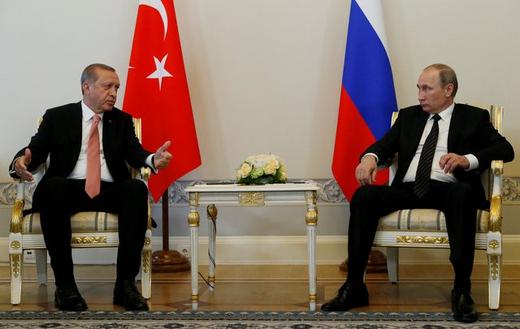 President Vladimir Putin met with his Turkish counterpart Recep Erdogan in St Petersburg yesterday, where the two ended their recent quarrel and took steps towards reinstating economic relations, which became unstable last year after Turkey shot down a Russian bomber on the Syrian border. Erdogan referred to Putin as ‘my dear friend Vladimir’ in his introductory remarks, prompting some witty remarks from Russian internet users, one of whom sarcastically commented, ‘Erdogan is no longer the Islamic State’s accomplice or Russia’s enemy!’ Putin described the meetings, which included military and economic officials, as constructive and substantial.  The FT says Turkey’s recent near-coup will likely damage its bid for EU membership, and notes that Putin will ‘seize any opportunity to drive a wedge between Turkey and its Nato allies’.  The pair believe that they can find a compromise on their different approaches to the Syria crisis.  Al Jazeera held an in-depth panel discussion about whether or not the two can truly be allies.  A branch of the British army warned in a leaked report that Russia’s military weaponry could overpower British troops on the battlefield.  Theresa May, the new British Prime Minister, spoke to Vladimir Putin by telephone, with the two planning to meet in China next month to work to improve ties.

Russian swimmer Yuliya Efimova won a silver medal in women’s breaststroke at the Olympics yesterday, despite receiving boos from the crowd, criticism for having previously failed two drug tests, and exchanging hand gestures with fellow competitors.  Russian swim chief Vladimir Salnikov said the atmosphere around his Olympic team reminded him of the Cold War.  One Russian fan attending the Games described ‘an anti-Russian atmosphere.’

Several hundred protesters gathered in Moscow for a permitted protest against Russia’s new antiterrorism laws (dubbed the Yarovaya Laws after their author, Duma member Irina). Anti-corruption activist Alexei Navalny was one of the speakers at the rally.  The Prosecutor’s Office is challenging a Moscow court’s refusal to change Navalny’s suspended sentence into jail time.  Vladimir Putin has forbidden Rosneft (majority-owned by the state) from taking part in next month’s privatisation of Bashneft.