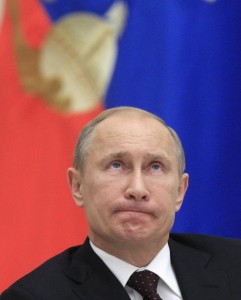 The editor of Ekho Moskvy (Echo of Moscow), and one of the founding members of Memorial, are among the top contenders fro this year’s Nobel Peace Prize.  Jailed activists Pussy Riot have been included among the finalists for the European Union’s Sakharov human rights prize: ‘Almost by tradition, the prize which carries a €50,000 check, has chilled relations with the government of the recipient’s country.’  Pussy Riot are in court this morning for their appellate hearing, which was adjourned last week.  The Federal Penitentiary Service is investigating a pair of leaked videos of Nadezhda Tolokonnikova and Maria Alyokhina talking about their current living conditions; RFE/RL suggests that the mystery interviewer was trying to provoke the women into saying something that would damage their case.  A reported 30 people rallied in Moscow to protest the upcoming changes to Moscow-based broadcasts from Radio Liberty.  Three opposition candidates due to run in gubernatorial elections this Sunday have pulled out and switched their support to United Russia-backed candidates.

Alfa Access-Renova, TNK-BP’s Russian shareholders, will sell out in an IPO if Rosneft acquires BP’s stake.  ‘AAR and Rosneft are the only known prospective bidders for BP’s stake,’ but according to Igor Sechin, President Vlaidmir Putin’s backing is behind Rosneft as a buyer.  Igor Shuvalov says that state companies will be prevented from buying stakes in other state companies during privatisation.  Iraq has contracted to buy over $4.2 billion worth of Russian weapons, and has approved a development contract for Block 10 with Rosneft.  President Putin is due to meet with the Iraqi Prime Minister at the end of the latter’s official visit to Russia.

Thousands of tonnes of ammunition exploded accidentally at a military base in Orenburg, near Russia’s border with Kazakhstan.  Tax discounts will allow 50 Russian fields to boost their oil output, ‘render[ing] profitable some 37 billion barrels of oil equivalent, or 20 percent of Russia’s reserves’.  Republican presidential candidate Mitt Romney made ‘millions of dollars’ helping Western tobacco companies enter the Russian market in the 1990s.  A new iPhone app, Bribr, allows the anonymous reporting of bribes.