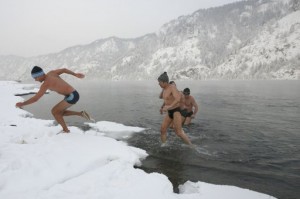 The ‘politically-motivated’ ban on U.S. adoptions will remain in place until January 2014, although comments by Kremlin spokesperson Dmitry Peskov indicate that some of the adoptions already in process will be permitted, except in the cases of those which have not yet been given court approval.  The Duma denies that a 14-year-old boy personally contacted President Vladimir Putin over his pending adoption.  Opposition activist Yevgeny Domozhirov says he has ‘no doubt’ that his being beaten yesterday by ‘an unknown assailant with a large stick’ was ‘connected to my political and anti-corruption activities’.  United Russia says it would support the lifting of a ban on electoral blocs touted as being of benefit to smaller, non-parliamentary parties, but a political expert says the ruling party would be the ‘main beneficiary’.

Novatek and Gazprom have signed a deal to build liquefied natural gas production facilities on the Yamal peninsula (with a total capacity of 30 million tonnes per year), part of a broader plan to export more gas to Asia.  Ukraine now controls less than half of Russia’s Europe-bound gas deliveries (42% of Gazprom’s outflow), compared to previous years where it saw the transit of two-thirds of the same product.  The Russian navy has received the first of a new class of Borei submarines, all with escape capsules, a measure to prevent disasters like the Kursk submarine explosion in 2000.  At a ceremony marking the completion of a new nuclear-powered icebreaking oil-rig supply vessel, Putin called for more high-tech ships.  The retail profiles of Russian banks will grow at half last year’s rate in 2013, analysis say, predicting worsening consumer loans and higher interest rates this year, as well as increased quality.

Former Defense Minister Anatoly Serdyukov is once again being questioned by investigators as a witness in a $100 million property fraud case.  State Duma deputy Vladimir Taskayev is under investigation for illegal hunting.  St. Petersburg has built a monument to the memory of Steve Jobs in the form of a six-foot-tall iPhone.

PHOTO: Members of a local winter swimming club take part in their weekly bathing session in the Yenisei River, with the air temperature at minus 17 degrees Celsius, in the town of Divnogorsk, outside Russia’s Siberian city of Krasnoyarsk January 11, 2013. REUTERS/Ilya Naymushin