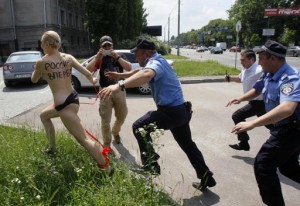 TODAY: All-Russia People’s Front a move towards grassroots activism?; candidates for Moscow mayor speaking out against migrant workers, Luzkhov to team up with Prokhorov to win race; Duma debates homosexual propaganda law as LGBT film festival is fined; no bids for Greece’s Depa from Gazprom; Russia has top shale oil reserve; Navalny calls on judge to step down; Putins’ divorce.

The thinking behind President Vladimir Putin’s All-Russia People’s Front is apparently that he is ‘tired of having a party that is based solely on him as an idol figure [and] wants to have a structure based on ideas’, but many see it as an attempt to distance the Kremlin from the now tarnished image of United Russia.  The group says it will focus more on civic activism than party politics, an area, notes RIA Novosti, more traditionally ‘dominated by opposition figures, like Alexei Navalny’.  Putin has emphasised ethnic and religious extremism and illegal migration as key government targets in the effort to maintain public safety.  This is now a popular political position, with the Liberal Democratic Party’s candidate for the position of Moscow mayor, Vladimir Ovsyannikov, stating that one of his aims is to rid Moscow of foreign migrants; acting mayor, Sergei Sobyanin, made similar statements last month.  Former mayor Yury Luzkhov is to work with Mikhail Prokhorov on his bid to win the post, which could pose a significant challenge to ‘the dominant campaign scenario in Moscow’.  The second reading of a controversial law is being debated in the Duma today, which would impose a nationwide ban on ‘homosexual propaganda’, loosely defined as ‘information aimed at forming non-traditional sexual behaviour among children’, with fines to be levied on those who break it.  Human Rights Watch is urging that the Duma reject the law, calling it a ‘cynical’ and ‘dangerous’ violation of basic human rights.  A Russian LGBT film festival has been fined $15,000 for failing to register as a ‘foreign agent’.

Gazprom decided against bidding for Greece’s gas monopoly, Depa, which had hoped that a bid from the Russian giant would revive interest; the sale fell through altogether, with Gazprom citing concerns about Depa’s future financial health.  Russia has emerged as the holder of the world’s largest reserves of shale oil, according to the U.S. Department of Energy, but will it be able to produce it efficiently?  Russian officials will have their work cut out for them ensuring security at the 2014 Sochi Olympics, to be held ‘almost on the doorstep of an active insurgency’.

Alexei Navalny’s team called for the judge overseeing his KirovLes trial to step down for his ‘loss of independence and impartiality’.  The Putins’ divorce got a lot more coverage than the opening of the trial against the Bolotnaya Square protesters, notes Masha Gessen.  The post-ballet announcement of their plan to split ‘was so clearly staged – so tasteless in its execution – that it has merely fed the sense that something else is going on.’

PHOTO: Interior Ministry officers and a security guard chase an activist from the women’s rights group FEMEN, as she stages a demonstration outside the Russian embassy in response to Russian President Vladimir Putin’s announcement of his separation from his wife Lyudmila, in Kiev, June 7, 2013. The woman intended to portray Olympic rhythmic gymnast Alina Kabayeva, referring to speculations that Putin could date the former sportswoman, according to FEMEN’s press release. The words on the woman’s back read, “Push Russia forward!” REUTERS/Gleb Garanich