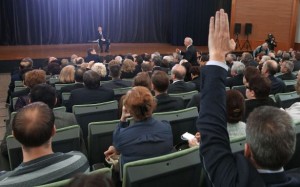 In a ‘symmetrical’ response to Washington’s Magnitsky bill, Russian deputies have submitted a draft law, supported by all four parties in the state duma, that would introduce sanctions on U.S. citizens accused of violating the rights of Russians.  Vladimir Putin has described Hillary Clinton’s belief that he has a re-Sovietization agenda as ‘utter nonsense’.  Meanwhile the President has told close supporters that he is mulling restoring the Soviet-era Hero of Labor title, as part of a broader campaign to foment patriotism.  At the same meeting, the President also asserted that United Russia needs to mount a more efficient anti-corruption campaign.  Opposition politician Vladimir Ryzhkov believes it ‘doesn’t stand a chance‘.  New statistics from the Prosecutor General’s Office show that there were more than 1.7 million human rights violations in Russia over the first half of 2012.

A 30-year-old suspected militant has been detained in the North Caucasus region of Kabardino-Balkaria over the murder of television host Kazbek Gekkiyev last Wednesday.  The head of Russia’s Hermitage Museum has defended the work of British artists the Chapman Bros against the criticisms of Orthodox believers.  Due to discord over rental prices, Russia looks set to give up its missile defence base in Azerbaijan, the last of its kind in the Caspian state.  Greenpeace claims that more than half of the world’s annual total oil spills take place in Russia.

Conservative party member in the Council of Europe, Robert Walter, has penned a letter in the Guardian rebuffing claims that the British party is being wined and dined by the Kremlin.  According to RUSAL, Kremlin-friendly tycoon Roman Abramovich will buy a smaller stake than expected in mining giant Norilsk Nickel, in a revised deal that will also reduce his voting rights.  Abramovich’s Millhouse will buy 5.87% of the miner (a $1.5 billion stake) as opposed to the initial 7.3%.  Will disagreements over telecom licenses cloud bilateral relations between India and Russia?  With agricultural output shrinking along with construction volumes, in the last quarter Russia’s economy grew at the slowest pace since its recovery at the start of 2010.

PHOTO: Putin listening to a question during his meeting with his official campaign representatives in Moscow on Monday, December 10, 2012. (Mikhail Klimentyev/RIA-Novosti/AP)