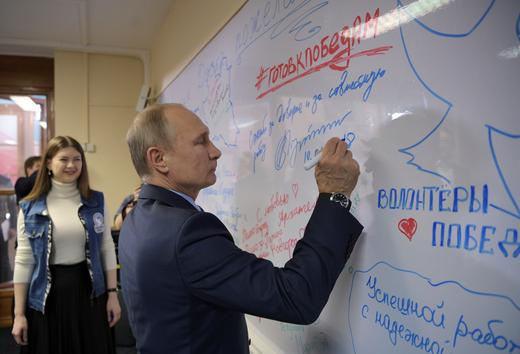 President Vladimir Putin called out the US for only focusing on Alexei Navalny in their denouncement of presidential candidates’ being denied electoral registration. Navalny “isn’t the only one who was denied registration but for some reason they didn’t mention others,” Putin said, thereby “exposing the preferences of the US administration […] they made a blunder in this sense”. Putin managed to make these comments again without mentioning Navalny by name, as he has done for many months. Putin described North Korean leader Kim Jong Un as “a shrewd and mature politician” who has completed his main strategic task of developing a nuclear weapon with global reach, and is now calling for calm. Putin was upbeat about the economy earlier this week, but Russia’s spurt of economic growth last year seems to have already ended, capping 2017 with two consecutive quarters of contraction despite a correlating period of oil price recovery. (Oil is now at $70 a barrel in London for the first time in three years.) Not only has the Reserve Fund been drained, but it now no longer even exists, with its remaining funds merged with the National Welfare Fund. One of Russia’s largest labour unions, the Interregional Labor Union of Automobile Workers (MPRA), has been disbanded by a St Petersburg court over accusations that it received foreign funding. The European University in St Petersburg has been forced to hand over its main campus building to the authorities after repeatedly being denied a teaching license.

Putin says the US Senate report which accuses Russia of large propaganda spending, money laundering, and corruption is damaging for bilateral relations, and that it is up to Washington to ameliorate ties. A US-based cybersecurity firm says it has found evidence that Russia-based hackers are planning to cyber attack anti-doping agencies in retaliation for athletes’ exclusion from next month’s Olympic Games. New cybersecurity firms are looking to avoid going the way of Kaspersky Lab. The improvised memorial to Boris Nemtsov, on a bridge near the Kremlin where he was murdered, has again been dismantled by Moscow authorities, who allegedly also physically assaulted its activist guards.

A prominent Orthodox Bishop, thought to be a spiritual adviser to Putin, is fueling the rumour that Czar Nicholas II was killed in an anti-Semitic “ritual murder”. Jonathan Steele in the Guardian reviews William Taubman’s biography of Mikhail Gorbachev; having written a book himself about Gorbachev and  the 1991 coup, Steele is unimpressed with Taubman’s treatment of the 1991 coup. An overwhelming four in five Russians say they find gay sex “reprehensible”.