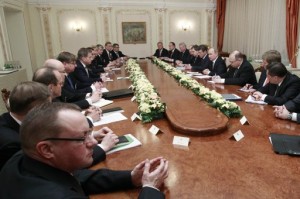 Russia has ‘condemned’ North Korea’s nuclear test as a violation of international obligations.  State Duma deputies have approved new legislation that will ban smoking near and in hospitals, schools, and public transportation as of June 1.  President Vladimir Putin has submitted a bill to the Duma that would ban government officials from holding overseas bank accounts or owning foreign bonds and shares.  YouTube is suing the Consumer Protection Service in a bid to overturn its decision to ban a video on how to apply special make-up; the watchdog’s head says the move is ‘a normal event’.  Serbia’s Srbijagas has agreed on a new gas price with Gazprom, cutting import costs by almost 10%.  The Kremlin is considering a request by Novatek for the right to export liquefied natural gas, which would make it an exception to Gazprom’s current monopoly.  ‘There is no definitive proof of illegal activity. It does, however, defy comprehension that the Sochi winter games can cost 2.5 times as much as the 2012 summer Olympics in London.’  The Supreme Court rejected the appeal by Gennady Gudkov against the Duma’s decision to oust him last year.

The amount of ‘dirty money’ (earned through corruption, trafficking, arms and other illegal practices) flowing in and out of Russia has more than doubled since 2004, says a U.S. think tank, estimating a $200 billion loss to ‘illicit financial outflows’ from 1994-2011.  St Petersburg has outpaced Moscow in terms of public-private partnership development, but lobbyists are calling for regulation in the sector.  NPR says that U.S. exporters to Europe ‘routinely make sure that their meat is free of ractopamine’, but that they will not do the same for Russia, leading to the current ban on U.S. meat products, worth $500 million a year.

The Opposition Coordination Council has launched a website to keep the public informed about its activities. Brian Whitmore considers ‘life after Putin’ and names some potential successors.  Liverpool Football Club has ‘major concerns’ about potential racism at an upcoming game in St Petersburg, and the team will be instructed not to walk off in the event of racial abuse unless ordered by the referee.  Novelist Alexander Solzhenitsyn was arrested on this day in 1974.