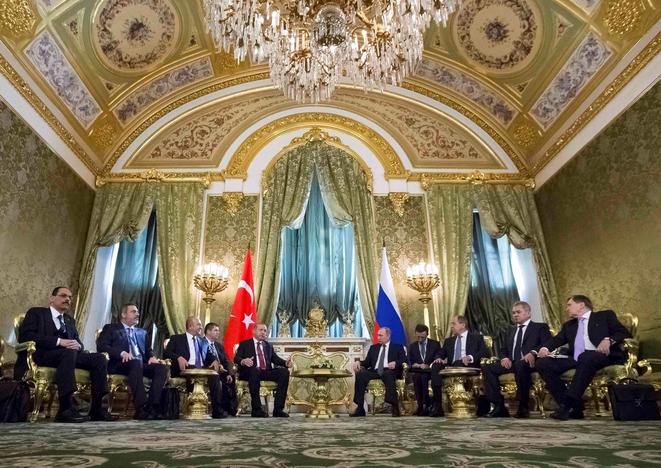 Kremlin spokesman Dmitry Peskov again has spoken out against anti-Russian “hysteria” in the US, saying he hopes it will come to an end soon. “[W]e consider it a real danger for the future of our bilateral relationship,” he said.  Peskov says Russia is still in the dark as to when dialogue will begin with the US regarding the improvement of ties. The ties between US President Donald Trump and Vladimir Putin’s Russia have been clearly plotted out in a series of charts.  The US is claiming that Russia is supporting the Libyan leader in a bid to control its major oil ports, control of which has sparked a civil war. (This report, alleging that private Russian security contractors have been operating in Libya, supports the claim.) Activist Ildar Dadin, released from prison just last month on charges of illegal protesting, has been detained again at a peaceful, one-man picket demonstration in Moscow. A Russian court has ruled in favor of television station Rossiya-1 against Planeta Nadezhd, a non-profit that lobbied for medical treatment for those affected by a nuclear power plant explosion; the station accused Planeta Nadezhd of espionage, causing its founder to seek asylum in France.  The Guardian reports on current world nuclear weapons stockpiles, showing Russia in the lead.  This piece looks at the long history between German Chancellor Angela Merkel and Vladimir Putin; Putin was stationed in Dresden by the KGB in 1985. “She grew up in Stasiland, so of course she had his number all along.”

The Kremlin is experiencing a “generational break”, as its highest-ranking members reach retirement age and a lack of mid-ranking and middle-aged staff are available to take their places. “Scores of Russian diplomats are well beyond legal retirement age,” and many have been in the administration for over a decade. One of Vladimir Putin’s closest allies, billionaire Alexander Ponomarenko, has purchased an oyster farm reportedly linked to the President. Prime Minister Dmitry Medvedev has finally responded to the fraud allegations made against him by opposition leader and campaigner Alexei Navalny – by blocking him on Twitter. The results of the autopsy of Vitaly Churkin, the Russian ambassador to the United Nations who died unexpectedly last month, will not be released, but the examiner determined that no foul play was involved, and that he died of a heart attack.

President Vladimir Putin met with Turkish President Recep Tayyip Erdogan last week, with both sides saying they have passed the stage of “normalisation of relations” and have restored “intensive political dialogue”, pressing forward with plans for major energy projects. Bloomberg explains why Russian Eurobonds have become a safe haven for investors. Russia has chosen Yulia Samilova as the singer for its Eurovision entry, despite rumours that it would boycott the event due to its being held in Ukraine. Oksana Sevastidi, the Russian sentenced to seven years in prison on treason charges, has been released from prison after being pardoned.