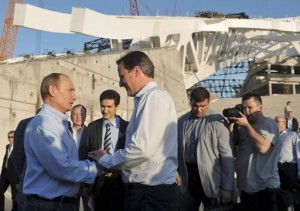 Investigators say that the torture and murder in Volgograd of 23-year-old Vladislav Tornovoi was a homophobic attack, with government critics blaming recent laws against ‘homosexual propaganda’ for encouraging homophobia. Gay rights activist Nikolai Alekseyev said the case ‘demonstrates the fruits of homophobic policy that is being pursued in the country’.  Others say the authorities are ‘accomplices’ in the murder, and Alekseyev suggested that the victim was only noted as gay by investigators to imply that he was ‘abnormal and therefore expendable’.  A reported 59 protesters were detained in Moscow over the past week as part of attempts to revive the Occupy movement.  Most of Russia’s high wage-earners live in sparsely populated hubs where natural resources are plentiful, says Forbes, concluding that this makes ‘a Moscow-led opposition’ unlikely.  The dismissal of Vladislav Surkov suggests that President Vladimir Putin is becoming increasingly isolated in his own government, says Reuters.

U.K. Prime Minister David Cameron left Russia with assurances that President Putin may soften his position on resolution of the Syrian conflict.  A transcript of their talks is available here, although it does not indicate any concrete measures beyond an acknowledgement of a shared aim to end bloodshed.  The Israeli Prime Minister will meet with Putin this week to discuss sales of missile batteries to the Syrian government, which could obstruct U.S. planes from flying over Syrian airspace – a day after U.S. Secretary of State John Kerry had been urging the contrary in Moscow.  An unnamed Russian official suggested that there are issues of disagreement over which parties have the authority to act.  A Liberal Democratic Party member apparently wants to ban the use of U.S. dollar bills.  Garry Kasparov says that the notion of Russia and the U.S. finding ‘common ground’ is a myth, and notes that the Boston bombing was ‘not the first time Russian security forces seemed strangely impotent in the face of an impending terror attack’.  New reports indicate that Russia withheld details from U.S. officials about bombing suspect Tamerlan Tsarnaev in 2011.

Deputy Finance Minister Sergei Storchak says that Russia has in fact not yet agreed to extend the terms of its loan to Cyprus. ‘[I]f somebody wants to see it as a done deal, there is nothing I can do about it,’ he commented.  The view of a declining Russian population, ‘the default position among the U.S. political elite’, does not match up to these figures.  Police in London intercepted a stunt by Russia’s radical art collective, Voina.  The New York Times talks to William Browder about Vladimir Putin’s ‘kleptocracy’.