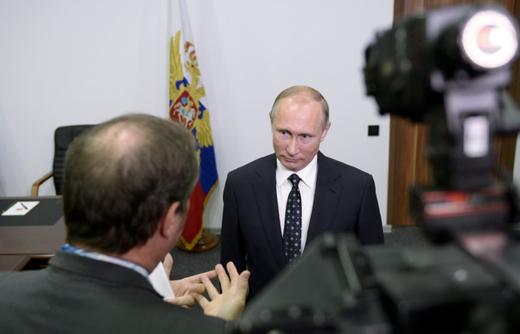 TODAY: Putin blames US for dire state of diplomatic relations and lack of progress in Syria; Lavrov dismisses US candidates as ‘pussies’; UK Labour leader compares Russia’s Syria atrocities to those of the US; Rosneft takeover of Bashneft completed; daughter of Kadyrov rival attacked.

Speaking at VTB’s annual investment forum in Moscow, President Vladimir Putin addressed the current state of diplomatic relations with the US, accusing it of preferring ‘dictate’ to dialogue,  and alleging that it is financing radical elements in Ukraine.  From Russia’s perspective, the new low in relations with the West is entirely America’s fault; the new State Duma is to begin its first term with a text that condemns the US for ‘steps resulting in a fundamental change in strategic stability’.  Putin also again insisted that hacking US government emails is not in Russian interests, and that accusations to the contrary are merely attempts to distract voters.  When asked for his opinion on the US presidential election candidates, Foreign Minister Sergei Lavrov quipped, ‘there are so many pussies around your presidential campaign on both sides that I prefer not to comment’.  Lavrov hopes that last-minute scheduled Syria talks this weekend will be ‘businesslike’, rather than ‘another general assembly like debate’.  The leader of the British Labour party, Jeremy Corbyn, says Russia’s atrocities in Syria are comparable to the US’ (and the Guardian evaluates his claim).  Speaking to a French television station, Putin blamed the US for undermining Syria ceasefire agreements despite Russian ‘concessions’, and argued that France disregarded Russian proposals for a draft resolution on Syria in order to accuse Russia of attempting to veto them.

The Kremlin has completed its sale of a controlling stake in oil producer Bashneft to Kremlin-owned Rosneft, for $5.3 billion.  Vladimir Putin reported that Rosneft used its own funds to buy the Bashneft stake. Rosneft’s acquisition of the company will allow it to increase production by 10%, and refining by 20%; Putin maintains that there will be no issues with freezing oil production at current levels, in line with OPEC agreements. Rosneft itself is to be privatised by the end of this year.  Lukoil has no plans to withdraw from its current joint venture with Bashneft on the Trebs and Titov oil field.

Just days after a quarrel between martial artist Fedor Emelianko and Chechen leader Ramzan Kadyrov, the former’s teenage daughter was attacked in Moscow.  Alexander Zhukov, head of the Russian Olympic Committee since 2010, will leave his post two years ahead of the scheduled expiration of his term, hinting that Putin is planning a shake-up of Russian sports leadership.