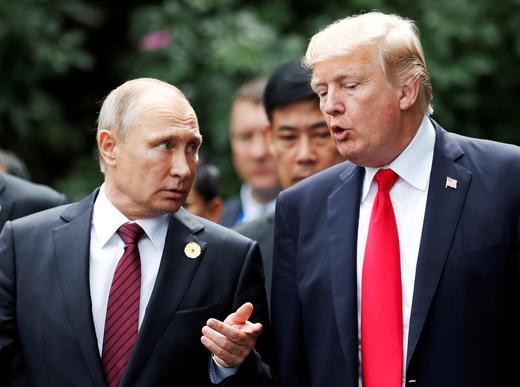 TODAY: Putin says Russia will respond in kind to US foreign agent laws, slams US for sanctions that damage its own economy, meets briefly with Trump; troll factory making propaganda in Ukraine; Russian spies to save the day? Drug rehab services cut in Crimea.

Speaking in Vietnam, President Vladimir Putin said Russia would respond in kind to US measures to restrict Russian freedom of speech by insisting that broadcaster RT register as a foreign agent, seemingly confirming last Friday’s statements from Vyacheslav Volodin that new legislation could be put forward as early as this week He also slammed US anti-Russian sanctions for damaging the US economy. Putin met briefly with US President Donald Trump, during which they signed a joint statement on Syria, but the pair did not hold substantive bilateral talks, with Russia blaming the failure to meet on US “inflexibility”. After Putin denied allegations of Russian meddling in last year’s election to Trump, who said he believe him, two former US intelligence officials said they believe that Trump is being manipulated by Putin. The BBC reports on a so-called “troll factory” in St Petersburg that is apparently teaming up with pro-Russia rebels in eastern Ukraine to create propaganda videos.

Former KGB agent believes Russia’s modern day spies must save the world from nuclear destruction. The $7 billion bridge to Crimea, still in construction for at least another year, is a mega project that is more for show than practicality, claims this piece. “The government might not be able to provide safety, good health care and education, but it can provide big projects. If you cannot do bread, you can at least do circuses.” Since the 2014 annexation of Crimea, heroin substitution therapy and HIV prevention services have been cut, causing many local addicts to revert, killing an estimated 120, and fueling a resurgent HIV epidemic. Putin’s self-made 2012 plan to save Russia’s cranes has ground to a halt.

Two Russian soldiers died in an explosion at an ammunition disposal drill in Siberia.