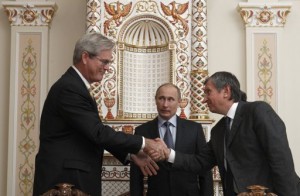 Two top finance officials at Skolkovo are being investigated over the suspected embezzlement of $800,000 in budget funds.  President Vladimir Putin wants RusHydro to investigate the disappearance of ‘billions of rubles’ in connection with a Moscow construction project.  He has also called for a ‘gradual’ end to Gazprom’s monopoly on exports of liquefied natural gas, paving the way for Novatek and Rosneft to export the fuel.  His decision reportedly comes after Igor Sechin warned him, ‘If we do not take a share of these markets, others will.’  Rosneft and ExxonMobil have signed a cooperative deal, giving the latter access to seven Arctic fields in exchange for its sharing a major Alaskan energy project with Rosneft.  Under a new agreement being discussed with China’s CNPC, Rosneft would receive $30 billion in loans in exchange for doubling oil supplies to China, making Beijing the largest consumer of Russian oil.  Norway’s aggressive gas pricing is reportedly forcing Russia to revise costly long-term European contracts that tie gas rates to the price of oil.

Olympics fans have been disappointed by rules that require purchasers of tickets for the 2014 Sochi Olympics to pay with Visa cards, and also by news that Visa will have a monopoly on payments of goods and services at venues for the Games.  Russia is throwing its weight behind a campaign to bring wrestling back to the Olympics, which at present is to be removed after 2016.  Consumer lending has seen a surge in the past year, with easy loans provoking the central bank to take steps to slow down the growth of unsecured loans.  U.S. President Barack Obama’s administration is to pursue cuts in Russia’s nuclear arsenals, as Rosoboronexport revealed that it sold twice as many weapons abroad in 2012 as in 2011, worth a total of $17.6 billion, and is continuing to sell anti-aircraft systems to Syria, with India remaining its biggest client.  Rosoboronexport denies that it is selling combat aircraft to Syria, and says it sees no reason to stop its arms trade with the country: ‘In the absence of sanctions, we are continuing to fulfill our contract obligations. But these aren’t offensive weapons.’

Konstantin Lebedev, an activist with the Left Front, has been released from pretrial detention and placed under house arrest until April 6.  Opposition activist Leonid Razvozzhayev will also be removed from pretrial detention, where he has been held on charges of plotting to incite riots at the May 6 protests, and brought to Moscow for further questioning.  Google will challenge in court Russia’s inclusion of a YouTube video on an official blacklist, in a bid to clarify current laws.

The order book for the IPO of the Moscow Exchange has been fully covered.  Spanish police have broken up a Russian-led gang of cybercriminals which reportedly has laundered more than €1 million a year since 2011.