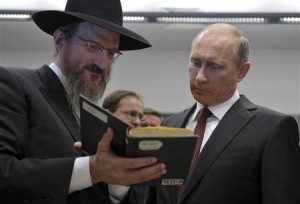 Deputy Prime Minister Arkady Dvorkovich said he would welcome changes to the ‘foreign agent’ bill passed in the Duma last year, and hinted that it may be ‘corrected’.  A group of Kremlin opponents from Russia traveled to the U.S. Senate yesterday to discuss a lessening of freedoms under Putin’s rule, with a particular focus on NGOs that rely on foreign funding and lie ‘at the interface between civil society and politics’.  The European Parliament also criticised the NGO law, as well as the new move to ban ‘homosexual propaganda’.  Kremlin opponents anticipate that the new anti-blasphemy law will be applied selectively.  President Vladimir Putin admitted earlier this week that ‘independent’ news channel Russia Today ‘is funded by the government, so it cannot help but reflect the Russian government’s official position on the events in our country and in the rest of the world’.  Billionaire Mikhail Prokhorov says he will not be running in the Moscow mayoral elections this September, and that his party would not participate in ‘prolonging the current mayor’s license’ (referring to acting Mayor Sergei Sobyanin’s move of stepping down early and forcing snap elections that will set him up to be re-elected).  Prokhorov blamed ‘objective circumstances and the authorities’ tricks’.  He said that he would focus instead on next year’s regional parliament elections.

Presenting a budget plan to senior officials, Vladimir Putin warned that the Kremlin faces falling revenues in coming years, and that ‘the means to increase state spending have been exhausted’.  In order to fulfil social commitments, Putin advised that the government ‘find reserves and redirect them towards the strategic tasks spelt out in the decrees’, prompting speculation that the $87 billion National Wellbeing Fund will take the hit.  He also criticised social welfare models in Europe, blaming them for a ‘dependency mentality’ that threatens ‘the moral foundation of society’.  Regarding Russia’s upcoming G8 presidency, Putin outlined plans to overhaul the International Monetary Fund’s voting system, to give developing economies a stronger voice.  A glut of cheap fuel exports will make it difficult to modernise industry in Russia, critics say.  Prime Minister Dmitry Medvedev estimates the cost of the 2018 World Cup at $20 billion, or double the original forecast.

Opposition leader and anti-corruption campaigner Alexei Navalny will be taken back to Kirov forcibly, at the request of prosecutors, following his failure to attend a court hearing yesterday (due to a clash with a separate inquiry at the Investigative Committee).  A long-standing row with the U.S. over the Schneerson collection of Jewish religious writings should be over, says Vladimir Putin, now that the texts are on display in a new public Jewish museum in Moscow.  ‘From this moment, I consider the question of the Schneerson library to be closed.’