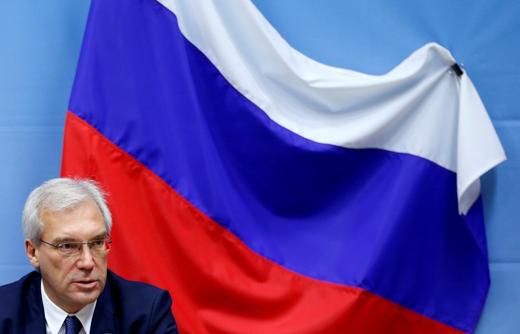 Roman Badanin, one of the top editors dismissed from the RBC media group in May, has described how he and his colleagues were thrown out following increasing Kremlin pressure, after their work angered officials; RBC’s reporting on the Panama Papers seems to have been the last straw.  Their replacements, hand-picked from the state-owned news agency TASS, have told staff that there will now be limits on what they can report and how. A recent investigation by RBC revealed that private lands near President Vladimir Putin’s country residence in Lake Valdai are owned by Putin loyalists Yury Kovalchuk and Arkady Rotenberg, who lease it out (complete with skating rinks, restaurants, and residences) to the Kremlin. ‘They’re not just residents – they’re gods. They call themselves Kremlin-3,‘ said one resident.  A major base (‘a full-fledged town’) is to be constructed in western Moscow to house the new National Guard police force.  Jeff Shell, a US executive with NBCUniversal, was denied entry to Russia after being detained for several hours yesterday. According to a new Levada Center poll, 73% of Russians feel they have no influence over what happens in their country.  As part of the new slew of anti-terror laws, missionaries will have to be registered with officially-recognised organisations, and evangelizing outside of recognised religious sites will be punishable by fine.  Other aspects of the legislation are expected to drive up shipping costs and wipe out independent couriers.

A Ukrainian high court has dismissed Gazprom’s appeal against a $3.4 billion fine levied against it by the Antimonopoly Committee earlier this year.  Following yesterday’s meeting of the NATO-Russia Council, the alliance will consider a Kremlin proposal to reduce the risk of in-air collisions over the Baltic Sea; the two sides remain at odds over the question of Ukraine.  Reuters sees the Kremlin’s promise to turn on airfare transmitters, if alliance planes agree to do the same, as a concession to NATO.  Leonid Bershidsky reports on the progress of Hyperloop One, a proposed high-speed tube train that Russia wants for its capital and which Vladimir Putin apparently believes will ‘fundamentally change the global economy’, drawing a broader conclusion about Russia’s record as a poor innovator.

The New York Times reviews Arkady Ostrovsky’s ‘The Invention of Russia: From Gorbachev’s Freedom to Putin’s War’.  Nadya Savchenko and Pyotr Pavlensky traded stories of their time in jail.  A case of bubonic plague has been reported in Siberia’s Altai Republic.