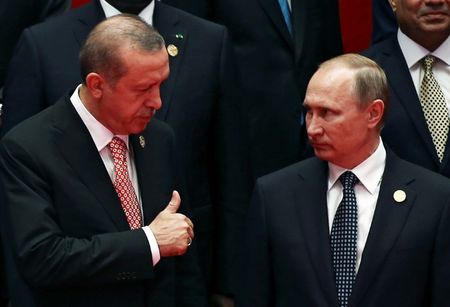 A new report by a private US research group alleges that Russia is using a ‘playbook’ of covert economic and political measures to manipulate several countries in Europe and destabilise Western order.  Russia’s Foreign Ministry has likened the US’ policy regarding Russia in recent months to one of ‘scorched earth’.  The proxy wars in the Middle East between Russia and the US could expand into further regions and bring the two sides into a full blown war, speculates Turkey’s Deputy Prime Minister.  A presidential aide explained Vladimir Putin’s decision to cancel his Paris trip in social terms, arguing that French President Francois Hollande effectively acted like a bad host in withdrawing and changing his initial invitations; but the French Foreign Minister says Putin canceled the trip because it would have been too embarrassing to discuss the horrific onslaught on Aleppo.  Russia’s recent large-scale military exercises are not intended as menacing, Defence Minister Sergei Shoigu stated, but rather are a necessary procedure for any country.  Russia’s new battle tactic: inflatable decoy bomber jets.  Russia completed the delivery of its S-300 air defense missile systems to Iran, a deal unpopular with Israel.

Rosneft’s purchase of a stake in Bashneft ‘conjures up an animal eating its own tail’, writes Bloomberg, given that the Kremlin will not only retain control of Rosneft and effective control of Bashneft, but also receive $17 billion. Rosneft head Igor Sechin’s recent ‘suing frenzy’, in which he went after several media outlets for publishing details of his personal and professional life, has backfired. ‘Readership of the offending Vedomosti article increased 42 percent after Sechin’s claim […] Type in the oil tycoon’s surname in Google and the search engine prompts: Wife. Yacht. Salary.’  Attorney Mark Feygin, who defended three members of Pussy Riot as well as Ukrainian war prisoner Nadezhda Savchenko, says Russian authorities are currently preventing him from leaving the country for political reasons. Syria has just bought one million tons of Russian wheat.

Russia will have a difficult time returning to the Parliamentary Assembly of the Council of Europe (PACE) if the group refuses to recognise Crimea as Russian territory.  Former NATO Secretary General, Anders Fogh Rasmussen, calls in the Financial Times for an extension of current anti-Russian sanctions, in light of the West’s inability to faze a country that now ‘knows it can’ get away with its disruptive tactics.