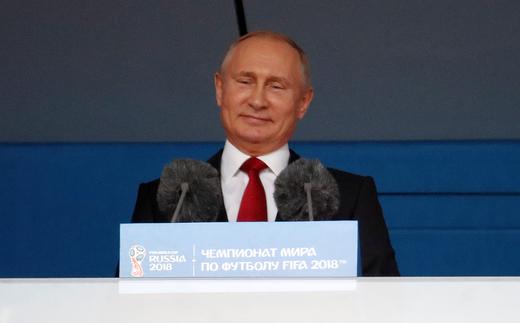 As President Vladimir Putin and the Saudi Crown Prince discussed their continued cooperation on oil markets, and their Energy Ministers agreed to expand cooperation in their energy sectors, Russia won its opening World Cup match against Saudi Arabia 5-0. Following the embarrassment caused by Duma deputy Tamara Pletnyova’s advice that Russian women should avoid sleeping with foreign World Cup fans, her colleague Mikhail Degtyarov stepped forward to urge the opposite, encouraging “love stories […] connected with the world championship”. Despite its high price tag and years of preparation work, the World Cup won’t “generate much of a blip” in the economy, reports Bloomberg; it might at best lead to a temporary, modest gain in the ruble. Russia denied reports that its naval forces are on heightened alert in the Black Sea to discourage Ukraine from disrupting the tournament. Prime Minister Dmitry Medvedev is proposing a gradual increase in retirement age through until 2028, from its current 60 to 65 for men and 55 to 63 for women. The Moscow Times chided him for announcing it whilst everyone’s attention is elsewhere. Police have been instructed to publish only positive news until the World Cup is over.

Opposition leader Alexei Navalny was released from prison after completing his 30-day sentence over his role in staging unsanctioned protests in Moscow against Vladimir Putin’s inauguration; he jokingly referred to his time as “a business trip”. He claimed that Moscow’s prisons have been refurbished to accommodate rowdy World Cup fans. Two opposition activists were jailed in Vladivostok for failing to comply with police orders during the founding gathering of a regional Open Russia branch. British activist Peter Tatchell was briefly detained whilst attempting to hold a one-man protest near the Kremlin yesterday. The acquittal of Gulag historian Yury Dmitriyev on child pornography charges has been overturned, with the Karelia Supreme Court calling him back for a retrial; his lawyer called the decision “unlawful”. Moscow police have apparently repeatedly attempted to interrupt a theatre performance about a jailed Chechen rights activists with fake bomb threats.

The US charged five Russians with breaking US sanctions by sending jet fuel to Syria. Moscow’s City Court has recognised the blocking of messaging app Telegram as legal.