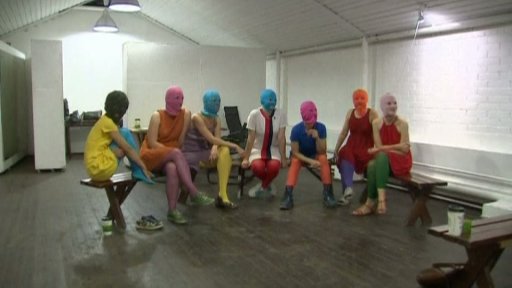 As the Pussy Riot verdict looms, around 100 Russian psychologists and academics have signed an open letter to the court excoriating the prosecution’s expert analysis, which they say ‘has a deeply banal character [and] cannot be considered psychological or psycholinguistic analysis at all’.  Members of the feminist collective still at large plan a series of new protest performances against President Vladimir Putin, whilst global support for the girls is apparently growing apace.  The Telegraph considers ‘how the Russian system set out to punish three young punk anarchists, and ended up playing into their hands by making their case a Dreyfus affair at home and a cause célèbre abroad.’   An incident in which an Orthodox priest using diplomatic licence plates crashed into two cars has placed the lifestyle of the church’s members under scrutiny.  Nineteen inmates of a Siberian jail have attempted suicide by slashing their wrists, prompting concerns about the possible violations of prisoners’ rights within the penitentiary.  The Moscow Times reports on the increasing number of gay Russians seeking asylum in the U.S.

Dwindling popular support, high political mismanagement, an inadequate PR machine: Brian Whitmore analyses why ‘the Kremlin is losing’.  A court of appeals in Odessa has upheld a request by prosecutors to extradite Adam Osmayev, a Chechen suspected of plotting to assassinate President Vladimir Putin, to Russia.  Actor Ivan Okhlobystin has reportedly been appointed head of the supreme council of the Right Cause party.

A Russian nuclear-powered submarine reportedly spent up to a month in restricted U.S. waters without U.S. Navy officials raising the alarm, a move analysts deemed ‘a signal of Russian intent’.  This op-ed considers what ‘negative diplomacy’ is costing Russia.  Georgy Bovt argues that United Russia’s push to ban ownership of foreign assets fails to address the core manifestations of corruption among the political elite.  Padel Fradkov is slated to become deputy head of the Federal Property Agency, which will oversee the privatisation of a number of state holdings.  Danish brewer Carlsberg is powering back into the Russian market.

PHOTO: The members of Pussy Riot who remain at large have vowed to continue with their protests. (Reuters)