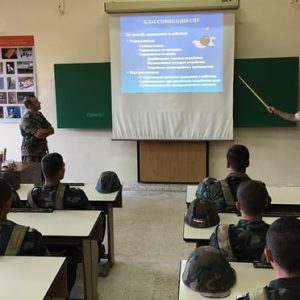 TODAY: Journalists invited to Syria missile launch; deescalation talks apparently proceeding; who is behind the week of bomb threats? Kremlin calls “hysteria” over Zapad a “provocation”; Kaspserky to testify in front of US lawmakers over espionage claims; Ford’s Russia venture grows; Rosneft seeking out opportunities in Norway; calls emerge for banning Russia from Winter Olympics over doping.

Russian submarines have reportedly fired seven cruise missiles at Isis targets in Syria and the Kremlin invited journalists to observe. The Guardian’s Shaun Walker is among them and reports that the trip has shown “just how involved in the conflict Russia has become”. He also notes that “awkward questions” about heavy-handed air strikes and civilian casualties were not encouraged. Russia’s principal negotiator at a sixth round of Syria peace talks in Astana has told the press that an agreement to create a fourth safe zone in the state is “very close.” Foreign Minister Sergei Lavrov has apparently been discussing the future of the conflict-hit Middle Eastern state with his American counterpart Rex Tillerson. Russia and US oil major Exxonmobil (of which Tillerson was formerly CEO) have apparently reached an out-of-court settlement with regards to a legal dispute over the Sakhalin-1 oil and gas project. Ukraine? ISIS? Religious fanatics incensed by the film Mathilde? Theories abound as to who is responsible for the series of bomb threats which have seen more than 100,000 people evacuated in dozens of Russian cities over the past week. Or are the acts of “telephone terrorism” just drills? Since the “security services are keeping silent”, analyst Aleksandr Golts concludes the latter.

The Kremlin has refuted claims that there is a lack of transparency regarding its Zapad military exercises and decried “whipping up hysteria”. Deputy Defense Minister Alexander Fomin has taken a softer tone: “I can calm our dear neighbors straight away […] The exercise is absolutely peaceful and absolutely defensive in nature.” This article considers whether the war games have more to do with next year’s presidential elections than geopolitics. The FSB’s collusion with criminal smuggling rings in the Baltic states is under scrutiny here. Moscow has criticised Washington’s decision to ban US federal agencies from using Kaspersky Labs software products as it “runs counter to fair competition”. The company’s co-founder has accepted an invitation to testify to Congress later this month regarding the security of his firm’s products.

Nuclear agency Rosatom is planning to sell a 49% stake in its Turkish nuclear project to a consortium of Turkish companies by the end of 2017, and hopes to begin construction of the Akkuyu plant by the end of March next year. In response to increasing demand, Ford’s Russian joint venture will take on more than 700 new workers at its plant in Elabuga in Tatarstan. Rosneft is apparently seeking out an asset swap in Norway. The Kremlin seemed to be warming up to the idea of digital currencies, but the Central Bank remains unconvinced: “it’s a sort of a financial pyramid that may collapse at any moment.” The world’s leading anti-doping agencies have demanded that Russia be banned from next year’s Winter Olympics.

PHOTO: Classes at a de-mining centre, Homs, Syria. (Shaun Walker for the Guardian)