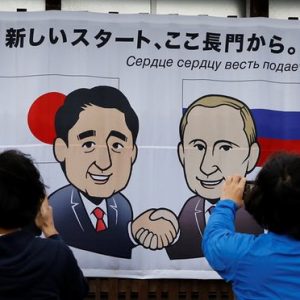 A summit is underway between Russia and Japan in order to reach a deal over the disputed Kuril islands.  Putin is ‘arriving late’, notes the Washington Post, but so is the deal, the lack of which has prevented the countries from formally ending their Second World War hostilities.  This is the President’s first visit to Japan in over a decade, and has been credited by one expert on the dispute as an ‘extraordinary development’.  New reports from two intelligence officials have alleged that Vladimir Putin was ‘directly tied’ to the hack of the U.S. presidential election and senior U.S. Republican senator Lindsey Graham has also stated that his email account was breached by Russian hackers.  To its great satisfaction, the Kremlin has managed to sow chaos across the globe, but, this op-ed argues, Donald Trump could in fact usurp Putin as purveyor of chaos and become ‘the great disrupter’.  The Russian President has beaten the President-elect to the top position on Forbes magazine’s annual list of the world’s most powerful people, making number one spot for the third consecutive year.

Students at a law school in Siberia have expressed discontent about having to attend lectures on ‘spiritual and moral education’ (which they have found to be on patriotism and Putin) by a Russian Orthodox cleric.  The European University in St. Petersburg, a ‘bastion of liberal thought’, is battling closure as the conservative authorities crack down.  Only 15% of Russians believe that they have a better quality of life now than they did under Communism, a new survey has found.  Plans to thank outgoing U.N. secretary general Ban Ki-moon specifically for his work on gay rights have been thwarted by Russia.

In Aleppo, where reports of executions of civilians spread, Moscow maintains that a ceasefire cannot be established until evacuation corridors have been set up.  The E.U. is highly likely to extend its sanctions against Russia by the end of this year, says a senior official.  On the politicisation of bobsleds.