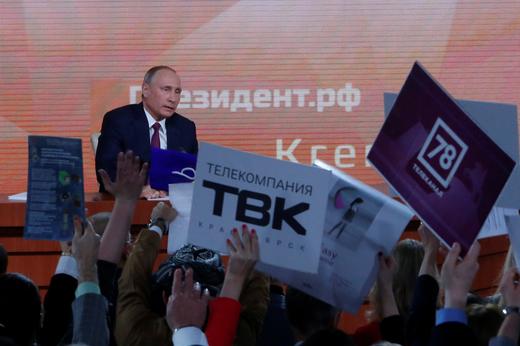 President Vladimir Putin held his annual press conference yesterday, discussing domestic and foreign policy, Ukraine, the environment, and Syria; this piece collects some of the best soundbites. RFE/RL reports on the two most interesting questions of the event, one from Ekho Moskvy journalist Tatyana Felgengauer, who was recently attacked in her newsroom, and the other from a fish enthusiast. Putin accused doping whistleblower Grigory Rodchenkov of having been drugged by the FBI, goaded members of the US congress by asking them, “Are you normal at all?”, and criticised his (woefully meagre) opposition for lacking a programme. Opposition leader Alexei Navalny (whom Putin did not mention by name) has released his full presidential campaign programme, despite not being able to run next year, promising an immediate improvement in quality of life by ending the corrupt use of government funds. Ksenia Sobchak, Putin’s other main challenger, asked Putin during the press conference why Navalny is not allowed to run; Putin responded by comparing him to former Georgian president Mikheil Saakashvili, and asking, “Do you want attempted coups?” Putin will run as an independent candidate next year, and is hoping that more than one political party will back him.

The European Union will extend its economic sanctions against Russia for six months. The Syrian opposition is urging Russia to salvage the United Nations’ peace talks this week, by persuading the Syrian government’s delegation to engage in face-to-face discussions. The Federal Security Service declassified more than a thousand “top secret” documents from Soviet days. The Moscow Times considers the potential impact of economic shifts in China and India on Russia, anticipating that they will bring more challenges than opportunities. The Economist charts the progress of Japan’s 70-year-old dispute with Russia over the Kuril islands.

Private lender Promsvyazbank will be bailed out by the Central Bank. The CEO of major bank Sberbank doesn’t believe in banks. Sberbank will increase its dividend payouts to 50% of net profits by 2020. The Central Bank is to merge three pension funds run by Otkritie into one, which will be the biggest non-state pension fund in Russia.