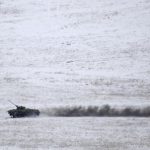 The European Parliament has adopted a resolution criticising ‘shortcomings and irregularities’ in the presidential election earlier this month, and calling for Vladimir Putin to ‘tone down his rhetoric against […] protesters’.  The Other Russia has published the full statement.  The four former policemen implicated in the death of Sergei Nazarov are all blaming a senior lieutenant for the brutal attack on the detainee.  Sergei Yefremov, head of the Dalny police station where the incident occurred, has been fired, and the Interior Minister says the case is a ‘betrayal’ of police values.  The beating of Dagestani journalist Sapiyat Magomedova by police in 2010 has not prevented her from fighting for the rights of other detainees, The Guardian reports.  A court in Krasnodar has refused to register Pride House, the gay rights organization (started by activists from the GayRussia.eu website), on grounds that it aims were against ‘public morality’, citing its ‘ideological influence’.

Entrepreneur Alexei Kozlov (whose wife is prominent journalist and activist Olga Romanova) has been sentenced to five years in prison for fraud, prompting outrage in the courtroom from his supporters.  A third suspected member of punk band Pussy Riot has been detained in Moscow.  Activist Sergei Udaltsov has been jailed for ten days for ‘refusal to follow police instructions’ at an unsanctioned rally in Pushkin Square last week, and Alexei Navalny has been fined $34 for his presence at a rally beyond an official cut-off point.  Four demonstrators who interfered with work at the Kozikhinsky Pereulok construction project in Moscow, concerned about its proximity to an architectural monument, have been detained.  The Washington Post says that Russia has come to the end of its ‘winter of tolerance’.

The Justice Ministry has explained why it denied registration to opposition party Parnas last year, saying that its members were ‘ineligible’.  The latest scandal of Putin machismo involves claims that the tiger he shot with a tranquiliser in 2008 – supposedly in self-defense – was from a zoo, had been tranquilised ahead of time, and died as a result of the stunt.  RFE/RL looks at the many animals who have helped Putin make headlines over the years. Former Soviet Olympic gymnastics champion Maria Filatova has had her passport application denied: ‘It’s so much easier to become an Olympic champion than to get a Russian passport,’ she said.

PHOTO: An armoured military vehicle drives during a drill conducted by Russian airborne troops at a firing ground near the settlement of Sadovyi outside the southern city of Stavropol March 15, 2012. REUTERS/Eduard Korniyenko