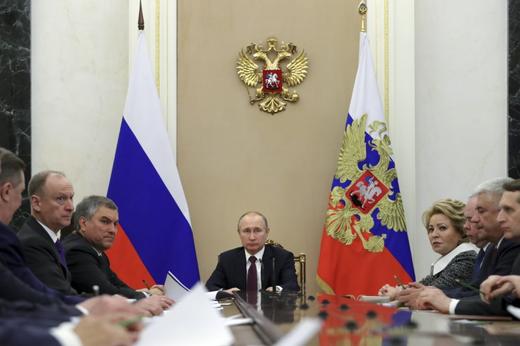 President Vladimir Putin warned that any further strikes by the West in Syria will lead to “chaos in international relations”, after Syrian President Bashar al-Assad told Russia that Western missile strikes this past week were an act of aggression. The US is planning to announce further new sanctions against Russia as early as today on all companies associated with the recent chemical weapons attack in Syria, says UN Ambassador Nikki Haley. Aluminium producer Rusal lost another 20% of its value in Hong Kong on the back of the news. Foreign Ministry Spokeswoman Maria Zakharova said the new sanctions aren’t based on any actual events, and are only being added to “punish us for the mere fact of being on the global arena.” The State Duma will consider draft legislation that would restrict a range of US imports, from products to services. Russia’s attempt to get the UN Security Council to condemn Western air strikes on Syria in the wake of the alleged chemical weapons attack has failed. President Vladimir Putin is due to be re-inaugurated on May 5; opposition leader Alexei Navalny, who says that Putin claimed roughly only half the population’s vote, is calling for mass protests that will allow the other half to be heard.

Investigative journalist Maksim Borodin has died after falling from the window of his apartment in Yekaterinburg, but friends and colleagues are doubting the police suggestion of suicide. Messaging app Telegram has officially been banned in Russia, although the restrictions has not yet come into effect, and founder Pavel Durov says the app uses built-in methods that prevent it from being blocked, and that it will find ways to circumvent the ban. “Privacy is not for sale, and human rights should not be compromised out of fear or greed,” he said. Several protests were held across Moscow over the weekend against landfill pollution, with 1,000 gathering in Volokolamsk, near the controversial Yadrovo landfill. An appeal by former Russian economy minister Alexei Ulyukayev against his bribery conviction was rejected by a Moscow court.

The Kemerovo shopping mall fire that killed 64 people may not end up being an isolated incident, given that a 2015 moratorium on inspections of small businesses has exempted hundreds of similar shopping centres who may have cut corners on safety measures. UK Labour leader Jeremy Corbyn says the UK must provide incontrovertible proof of its accusations that Russia was behind the poisoning of former double agent Sergei Skripal.