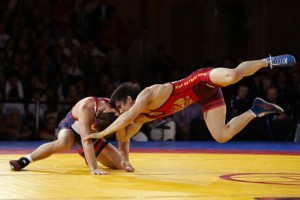 TODAY: Rosbank chairman held over suspected bribes; witness at Navalny trial says he did not have authority to commit the crimes he is accused of; Golos to continue actions despite ‘foreign agent’ threats; Medvedev on business laws, Putin on corruption; Fogle saga draws laughter; United Russia loses a member.

A criminal case has been opened against Rosbank chairman Vladimir Golubkov, who is being held on suspicion of receiving illegal monetary compensation; he is accused of receiving over $1 million in bribes in just one year.  A video of police raiding Rosbank’s offices and confronting Golubkov has been posted online.  The news is expected to have a knock-on effect for Société Générale, Rosbank’s parent company.  The trial of anticorruption blogger and opposition figure Alexei Navalny resumed yesterday in Kirov.  A Kirov official, who testified yesterday, said that Navalny could not have carried out the theft he is accused of, because he did not have the necessary authority.  His lawyer also reiterated her opinion that the case against him is politically motivated.  Independent elections watchdog Golos says it is determined to continue its activities, despite threats to label it as a ‘foreign agent’ and remove its legal status.  Prime Minister Dmitry Medvedev says he intends to make laws for businesses simple and clear, in a bid to make the current system more welcoming for entrepreneurs.  Addressing all four Duma factions, President Vladimir Putin praised his deputies, and spoke about the need to combat corruption.

Russian officials are downplaying the capture of alleged U.S. spy Ryan Fogle, saying that it won’t badly affect cooperation with the U.S. ‘You’d like us to go into anti-American hysteria? I think Russia reacts more sensibly to many things than the American side,’ said Alexei Pushkov.   The handling of this latest spy saga ‘bears [the] hallmark’ of Vyacheslav Volodin, the Kremlin’s chief of staff, says Reuters.  Images released of Fogle’s ‘bizarrely old-school array of spying tools’ has sparked ridicule across the globe.  A veteran of Russia’s military intelligence service doubts that the case was real, calling it ‘a badly staged comedy from the 1970s’ and disputing the lack of technology, terms of the letter Fogle was carrying, and proposed salary for his supposed recruit.  Or, as the Washington Post put it, ‘A couple of wigs, sunglasses and a compass? Really?’

United Russia has lost Volgograd member Tatyana Tsybizova, who complained that the party is failing to take action on important issues, and in particular on regional healthcare.  Finance Minister Anton Siluanov says the government has no room to raise spending.

PHOTO: Russia’s Artas Sanaa (R) leaps off the mat while wrestling Logan Stieber of the U.S. during the Rumble on the Rails wrestling event held inside the Grand Central Terminal in New York May 15, 2013. REUTERS/Lucas Jackson