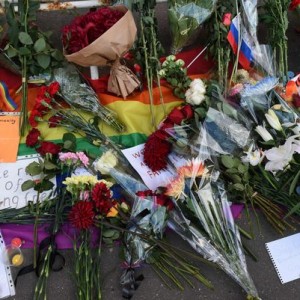 A gay couple who came to express condolences for the 49 victims of the Orlando massacre by placing a tribute at the U.S. embassy in Moscow have been detained by police, in what the Moscow Times says reflects the ‘awkward response’ of Russia to events which targeted the LGBT community.  According to political analyst Alexander Baunov, Putin’s official response (expressing condolences) demonstrates how Russia values it as an opportunity to move toward ‘normalizing relations with the West, with an eye on lifting sanctions in the future. Much like in the aftermath of 9/11, it will also help Russia push its agenda for an “anti-terrorism coalition”.’  The Defense Ministry has announced that a 48-hour cease-fire will commence on June 16 in the Syrian city of Aleppo, a day after U.S. Secretary of State John Kerry warned Russia and Syria that a cessation of hostiles had to be respected.  The Canadian government is reportedly considering a new commitment to deploy hundreds of troops in Eastern Europe as part of an effort to curb Russian aggression in the region.  Defense Ministry spokesman Igor Konashenkov says the objective of NATO  (which is not happy about Moscow’s new military drills) is to ‘deliberately whip up panic and maintain the image of a treacherous enemy in order to secure colossal military budgets.’   The Huffington Post considers whether Russia has pulled off its ‘China pivot’.

Yuri Chaika will enjoy another five years as Russia’s chief prosecutor, after being predictably reappointed.  Activists protesting the fact outside the Federation Council building were reportedly illegally detained.  Election watchdog Golos has accused the ruling United Russia party of repeated violations during their primaries in May; opposition party Parnas were also criticised.  Three State Duma deputies have introduced a bill to cancel Article 282 of Russia’s Criminal Code against inciting hatred or enmity, which is frequently used to target any form of government critical activity.  ‘[B]asically a joke, […] albeit an unfortunate one’, says a Foreign Ministry spokeswoman about an incident which saw a Russian diplomat to the UN Human Rights Council  threaten a human rights activist with a screenshot from television show ‘Game of Thrones’, and the message ‘our blades are sharp’.

The Moscow Times has a handy guide to the current state of the Russian economy.  Greenpeace analysts have found that Russia is significantly under-reporting wildfires as satellite data reveals 3.5 million hectares have burned this year, whilst the government’s own statistics put the damage at 669,000 hectares.