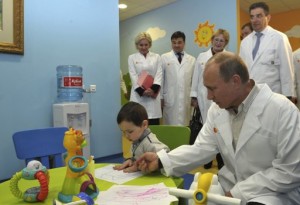 Foreign Minister Sergei Lavrov met with U.S. Secretary of State John Kerry yesterday, leading to ‘constructive’ talks about the Syrian crisis, and a promise from Kerry to push for transparency regarding Russian children adopted by U.S. parents.  Their relationship is expected to be stronger than that between Lavrov and Hillary Clinton, Kerry’s predecessor.  A lawyer for the parents of Max Shatto, the Russian boy who died under the care of his U.S. family, says that his clients did not kill the boy, and described the recent allegations against them as a ‘nightmare’.  President Vladimir Putin called for all obstacles preventing Russians from adopting children should be removed as quickly as possible, and signed a decree to increase social allowances for full-time parents of disabled children by over 4 times.  Putin wants the government to limit the annual growth of utilities prices to 6%.  The Moscow headquarters of RusAl was raided yesterday as part of an investigation into allegations of tax evasion.

Ukraine is seeking to import gas from Poland, Hungary, and Slovakia in a bid to replace expensive Russian supplies.  Is Qatar planning a $3 billion investment in VTB?  The central bank’s independence is not at risk, insists the Kremlin, as the World Bank cuts its 2013 growth forecast for the Russian economy to 3.3%.  Marina Litvinenko’s lawyer has accused the British government of seeking to cover up evidence that Russia was behind the poisoning of her husband, Alexander Litvinenko, in 2006.

The BBC reports on Russia’s recent bill that aims to impose a nationwide ban on ‘homosexual propaganda’, discussing its ‘divisive’ effect in parliament.  Lavrov has defended the proposed legislation, saying that Russia had no ‘international or common European commitment’ to gay rights, and that it ‘has its own moral, religious and historical values’.  The deputy head of the Buryatia repubic’s Federal Prison Service has been accused of stealing money donated to cancer patients and Krymsk flood victims.  The Guardian reports on the current popularity and significance of the Cossacks.

Gold-winning Russian wrestler Sagid Murtazaliev has vowed to return his medal in protest against the International Olympic Committee’s decision to remove wrestling from its list of core sports.