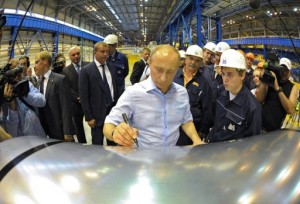 A former police officer is to be charged in connection with the murder of journalist Anna Politkovskaya, for following her in the days before her death and providing a murder weapon.  Rights groups are frustrated by the latest charges: ‘Even if Mr Pavlyuchenkov did organise the killing, it’s very unlikely he was the one who ordered it.’  Foreign Minister Sergei Lavrov accuses the West of ‘blackmailing’ Russia over Syria, ahead of Vladimir Putin’s meeting with Kofi Annan this afternoon.

The bill that will brand foreign-funded NGOs as ‘foreign agents’ is not just a worry to rights groups – it could also affect business groups like the Russo-German Chamber of Commerce.  United Russia wants the bill to extend to media outlets, although an existing mass media law already bans them from receiving more than 50% of their funding from abroad, making a new law ‘pointless’.  Wiretapping of opposition phone lines is ‘a sign of the times, with official statistics showing that wiretapping has nearly doubled in Russia over the past five years.’

TNK-BP remains hanging in the balance: both major shareholders (BP and AAR) are currently looking to sell at least a portion of their current holdings.  Private Russian banks will struggle to meet steep new lending hikes.  Is the oil and gas industry about to face a slew of government takeovers, as the Kremlin seeks to secure its fiscal position?  This year’s wheat crop will see a 20% drop, year-on-year, to 45 million metric tons.  Poland is suspicious of Russian investment, and is currently fending off a hostile takeover bid of Azoty Tarnow by Russia’s Acron.