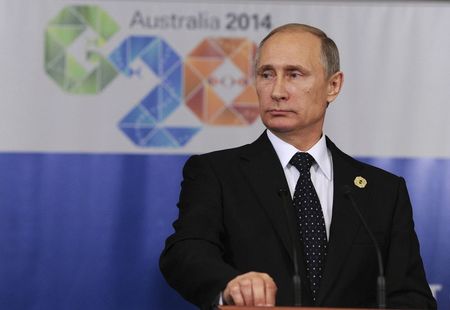 President Vladimir Putin left the G20 summit in Brisbane early yesterday ‘after enduring hours of browbeating’ by various Western leaders over his support for separatist rebels in Ukraine. Putin initially insisted that his early departure was due to the need to get some sleep, but it has been widely interpreted as a response to his frosty reception at the gathering.  Fyodor Lukyanov says the early exit was a mistake, correctly anticipating that it would be seen ‘as a sign of stress’.  Putin’s most spectacular confrontation was with Canadian Prime Minister Stephen Harper who, whilst shaking Putin’s hand, bluntly told him, ’you need to get out of Ukraine’, and then called him a liar.  The Times has video of U.K. Prime Minister David Cameron and U.S. President Barack Obama both slamming Putin in their summit addresses, as well as a clip of Putin’s speech in which he expressed hope for a resolution of the conflict in Ukraine; but Putin also told German television that Russia will not allow Kiev to destroy its political adversaries in eastern Ukraine.  State-run Channel One claimed it has proof that MH17 was shot down by a Ukrainian government fighter.  30,000 people marched in the Georgian capital of Tbilisi over the weekend in protest of a proposed treaty between Russia and Abkhazia that would create joint military forces.  Russia is planning to create its own version of Wikipedia in order to provide ‘reliable’ information to its public, deeming the existing encyclopedia incapable of providing information ‘in a detailed or sufficient way’.

Nato Secretary-General Jens Stoltenberg says Russian bombers flying over international and European airspace are putting civilian passenger jets at risk because they do not follow agreed safety procedures.  The German Economy Minister Sigmar Gabriel says he does not think that tightening sanctions is the way to resolve the Ukraine crisis, or to ‘move forward economically’.  A Bloomberg poll says 52% of international investors see Russia as the biggest security risk to world markets.  Western investment banks’ income from syndicating Russian debt sales and shares this year is a quarter of what it was in 2013 thanks to sanctions.  Russia is being hit hard by failing oil prices, and the International Energy Agency says that the current price drop (to $78 a barrel over the weekend) is only the beginning.

Amanda Foreman critiques the misogyny of Russian culture, saying that, in all of her world travels for research, ‘only in Russia did I witness sexism bolstered by state-sanctioned menace and contempt’.  Vyacheslav Tetyokin’s summation of Central Bank chairwoman Elvira Nabiullina as ‘the most expensive woman in the history of our country’ does not do much to refute Foreman’s claim. Both Channel 4 and the Guardian interviewed former Pussy Riot members Maria Alyokhina and Nadezhda Tolokonnikova.  Israeli photographer Tomer Ifrah has a striking collection of photographs taken in the Moscow metro.