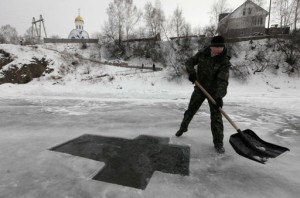 Alexander Dolmatov, an activist with the Other Russia opposition party, has committed suicide in the Netherlands, apparently after learning that he was due to be deported back to Russia.  Adam Osmayev, a suspect in an alleged assassination plot against Vladimir Putin, has retracted his earlier testimony, saying that it was made under physical and psychological torture.  A new charge of making a false crime report has been brought against opposition activist Leonid Razvozzhayev in response to his claims that he was tortured after being kidnapped in Ukraine.  A new U.S.-Russia spat is brewing after a Washington judge declared the Russian government in contempt of court and fined it $50,000 a day for ignoring his 2010 order to return the Scheerson Collection, an archive of historical books and documents.  Moscow is outraged over the ‘absolutely unlawful and provocative’ decision and warned of ‘serious consequences’.  Could the U.S. outstrip Russia as the world’s biggest producer of crude oil?  The director of the Bolshoi Ballet, Sergei Filin, has been attacked with acid by an unknown assailant.

Putin’s adviser on child rights, Pavel Astakhov, dismissed protesters’ calls to reverse the ban on adoptions of Russian children by U.S. citizens.  Astakhov says that Americans in the final stages of their adoptions will be allowed to take their children home, but expressed concern that adopted children in the U.S. were just as likely to be abused as to find a loving home.  In Vedomosti’s view, ‘[b]y opting to “bargain” over every child, lawmakers and leaders are attempting to save face and win public relations points with conservative members of Putin’s core electorate.’  Two mothers waiting in Russia to take their children home spoke to the BBC.  Russia’s courts are increasingly treating sales at below-market prices as theft.

The Audit Chamber insists that it would be ‘practically impossible’ for anyone to steal funds from the Sochi Olympics.  George Monbiot criticises the emergency Siberian decree which offers bounties for every wolf killed in the region.  The assassination this week of Aslan Usoyan, or Ded Khasan, the mafia boss and ‘gangster of the old school’, has sparked fears of a mob war.  ‘The killing of such an influential figure cannot go without revenge from his supporters,’ said MP Alexander Khinshtein.  BSR has a Q&A about Usoyan’s life and the underworld phenomenon of ‘crowned thieves’.

PHOTO: A worker prepares a cross shaped bathing hole for the forthcoming Russian Orthodox Epiphany celebrations on the Mana river near the village of Ust-Mana, 31 km (19 miles) south of the Siberian city of Krasnoyarsk, January 18, 2013. REUTERS/Ilya Naymushin