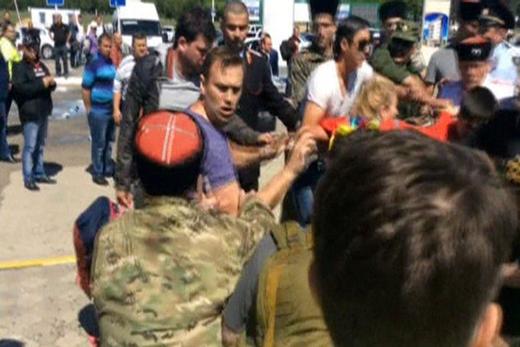 Alexei Navalny and fellow anti-corruption activists were attacked by a group of around 20 to 30 men wearing Cossack uniforms at an airport outside Anapa yesterday, who threw milk and kicked them to the ground; Navalny says the attacks must have been organised by the authorities, and accused the police of doing nothing to help. Despite video evidence, Dmitry Peskov wondered, ‘Was it really an attack?’  One of the men involved said it was not their intention for the incident to turn violent. ‘We just wanted to show them that there is no room here for Navalny who lives on American money.’  The chief of Anapa’s Cossack community says those who attacked Navalny and his group were not official Cossacks, and that police are looking for them.  Performance artist Pyotr Pavlensky says he suffered a broken knee and cracked rib after being assaulted by detainee escort officers in Moscow City Court.  The Duma has amended the foreign agents law to exclude charities and NGOs working in art and culture from the classification.

Finance Minister Anton Siluanov defended the Kremlin’s new higher dividend policy for state companies, saying that if the requirement drains them of cash for investing, they can borrow.  It’s looking likely that Bashneft will be privatised, following Putin’s exclusion of the oil producer from a list of strategically important companies.  Russia has submitted it newest set of documents regarding the case of Mikhail Khodorkovsky to Interpol.  The US Justice Department is investigating state-sponsored doping by top Russian athletes, turning ‘what has been a roiling sports controversy into a federal criminal case‘.

The Guardian reports on FindFace, the facial recognition app that’s becoming increasingly popular in Russia.  RFE/RL has a portrait of ‘plain-looking bureaucrat’ Vladimir Putin in the early 1990s, as painted by a former business associate.

PHOTO: Russian opposition leader Alexei Navalny and his supporters are attacked by Cossacks at an airport in the Black Sea resort town of Anapa. May 17, 2016 (REUTERS TV)