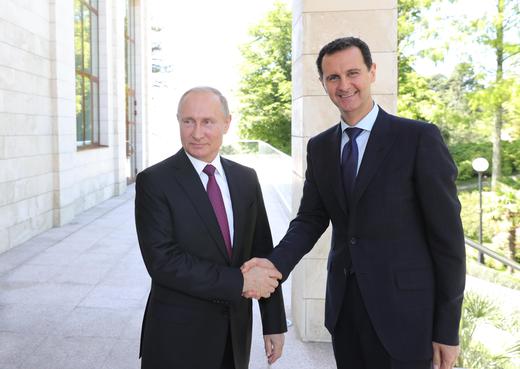 President Vladimir Putin’s Syrian counterpart met with him in Sochi yesterday for “detailed” talks, mutual congratulations on “military success” and “improving stability” in Syria, and a pledge to set up conditions to support the ensuing political process. The Trump administration is calling for new sanctions against Russian officials over arms control violations; the Kremlin refuted its accusations. The Nord Stream 2 pipeline from Russia to Germany would allow Moscow to place new monitoring technology in the Baltic Sea, thus raising US intelligence and military concerns. The US also said that, under a new bill passed last year after Russia annexed Crimea, it could add further sanctions to its existing arsenal if Nord Stream goes ahead. The US Ambassador to Russia will refuse to speak when he appears on the panel of the St Petersburg Economic Forum next week, because he was due to speak alongside sanctions-hit oligarch Viktor Vekselberg. The State Duma has pressed pause on its legislation to punish those who follow foreign sanctions within Russia, after pressure from various business lobbying groups, who will be invited for feedback. Matters at sanctions-hit Rusal are so severe that some of its workers are going without full pay; it still hasn’t been able to fully resume aluminium shipments.

The Federal Anti-Monopoly Service has fined Gazprom and one of its subsidiaries $3.4 million for violating anti-trust laws in the Samara region.  VTB raised almost double its net profits in the first quarter to achieve its all time record of $897.5 million. The Independent explains why the Balkan countries entering the EU is the last thing Russia wants. The Investigative Committee opened a criminal case against a US journalist who suggested that Ukraine should bomb Russia’s new bridge to Crimea. The Defence Ministry has disbursed $24 billion this year, “a very impressive sum,” Putin noted; Russia’s weaponry exports last year, in spite of sanctions, totaled $13.4 billion. Roskomnadzor apparently managed to temporarily blacklist the WhatsApp messaging service as part of its ongoing campaign to block messaging app Telegram. Russia’s population will shrink by 11 million by 2050, by UN estimates.

Yelena Malakhovskaya, the anchor of online opposition network Navalny LIVE, was detained in Moscow in connection with the protests held earlier this month against Putin’s inauguration. Dozens of lawmakers filed incomes below the poverty line, making what Transparency International called “a sham” of the declaration system.