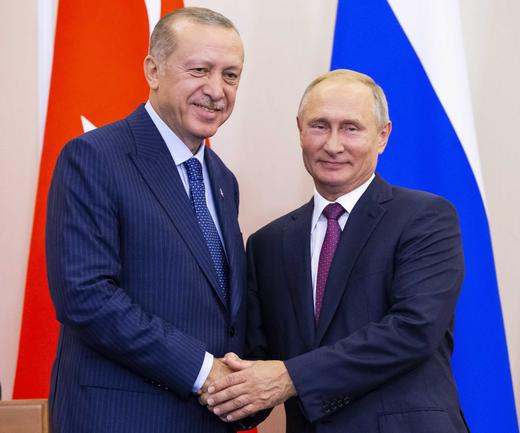 As the counting of gubernatorial votes drew to a close in Primorsky Krai, Kremlin candidate Andrei Tarasenko was losing to his Communist challenger Andrei Ishchenko, but then managed to win anyway – by almost 100% of the vote. One electoral geography expert described the result as “mathematically impossible”. Election monitors registered several complaints of fraud, and hundreds of Ishchenko’s supporters marched in Vladivostok yesterday to protest what they say was a rigged vote. Veteran Communist Party leader Gennady Zyuganov called the vote count “criminal lawlessness”. During a meeting with his Turkish counterpart Recep Tayyip Erdogan, Russian President Vladimir Putin set up a demilitarised buffer zone in the Syrian province of Idlib in a bid to block a large-scale Russian attack on the entire region. The pair praised themselves for preventing a major humanitarian crisis, but experts do not have much faith that the deal will hold. A Russian military aircraft carrying 14 people was lost while flying over Syria.

One of the new Wikileaks emails leaked to AP News shows that Julian Assange applied for a Russian visa in 2010. At a UN Security Council session, the US accused Russia of violating international sanctions on North Korea by transporting oil and other commodities to its ships at sea. The Russian military is claiming that the missile that downed Malaysia Airlines Flight 17 in 2014 was sent to Soviet Ukraine in 1986 and never returned. The Moscow Times looks at the case of feminist blogger Lyubov Kalugina, who is facing charges after speaking violently about men online; a lawyer with the Consortium of Women’s Nongovernmental Associations argues that, in the eyes of the law, “men are allowed to ‘joke’ about these things, and women, clearly, aren’t”.

Leonid Bershidsky argues that Russia should own up to the friendly relationship between Stalin and Hitler. A key witness in a mafia bribery case involving several high-level Investigative Committee officials has been shot dead.