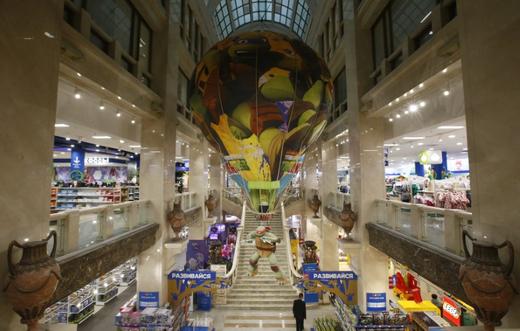 What more appropriate way to commemorate the U.S. presidential inauguration this Friday than with a discount day for U.S. citizens from the Army of Russia store? Outgoing President Barack Obama says that, from the beginning of his leadership, he always sought constructive relations with Russia, but that Vladimir Putin’s ‘adversarial’ rule has ushered in an anti-American rhetoric and a belief that ‘whatever America’s trying to do must be bad for Russia’.  Andrei Kostin, the chairman of VTB Bank, spoke to Bloomberg about the current climate of mistrust as ‘very much created from the Western side’, and what Trump’s presidency might mean for Russia, namely, ‘hope and opportunity’ for a better relationship. (He also, in contradiction of reports earlier this week, said that VTB had nothing to do with the financing of the sale of a 19.5% stake in Rosneft last year.) Recent research suggests that most Americans view Russia as a threat, but also that Vladimir Putin’s favorability has increased, as compared with two years ago, thanks to positive Republican views.  If participants of the World Economic Forum in Davos are anything to go by, Russians on the whole are extremely optimistic about a Trump presidency.  The Guardian says that now is the time to ‘expose Europe’s pro-Putin populist web’.  Federation Council head Valentina Matviyenko says Russia is open to dialogue regarding the ban on U.S. adoption of Russian children.

Russia and Turkey are teaming up to bomb Syria, and are working together on a new round of Syria peace talks, to be held in Kazakhstan next week.  Vladimir Putin discussed peacemaking in Syria and Ukraine with French President Francois Hollande and German Chancellor Angela Merkel on the telephone yesterday.  President Vladimir Putin presided over a ceremony yesterday launching a new domestic gas pipeline and two new oil pipelines to deliver supplies to northern Europe.  In unsurprising news, Ukraine’s Naftogaz says it will not pay the $5.3 billion that Russia wants to charge it for gas that it didn’t buy.  Rosneft head Igor Sechin doesn’t care that migalka (blue flashing lights that give drivers certain privileges) are no longer authorized for use by the heads of state-owned companies.

Edward Snowden’s leave to remain in Russia has been extended for another three years, as a Russian official said that, even under improved U.S. relations, he would not be extradited.  His lawyer hinted that he may file a formal request for citizenship in the near future.  A computer programmer accused of illegal missionary activity for giving a talk on the philosophical origins of yoga, has been cleared of his charges at a court in St Petersburg.  A former teacher and poet in Oryol is being investigated for writing a pro-Ukraine poem.