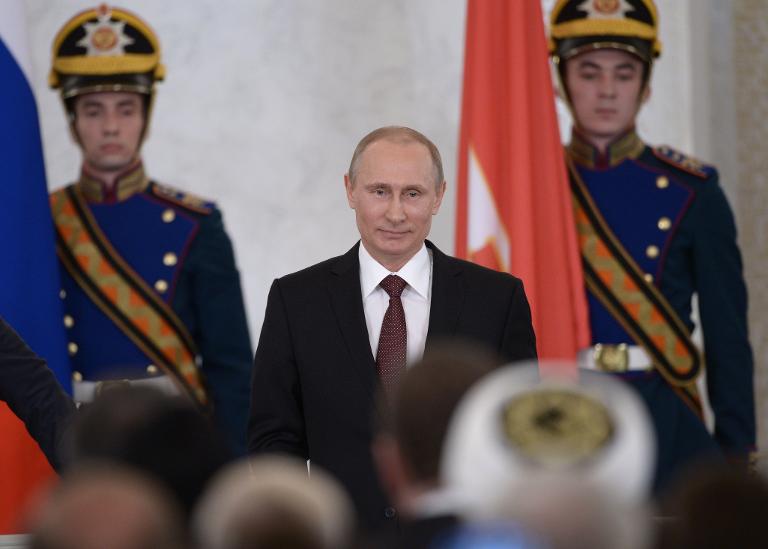 President Vladimir Putin approved a draft bill to allow the annexation of Crimea yesterday and signed treaties with Crimean leaders to the same effect, sparking rumours of Russia’s suspension from the G8 (since denied by, among others, German Chancellor Angela Merkel).  Following the annexation, Putin was given a  number of standing ovations during his emotional and staunchly anti-Western Crimea speech (click here for link to video), in which he stated an ‘unshakeable conviction’ that Crimea ‘has always been an integral part of Russia’.  America responded with condemnation: the White House is preparing further sanctions; U.S. Secretary of State John Kerry said the President’s comments ‘really just didn’t jibe with reality’; and U.S. Vice President Joe Biden called Russia’s annexation of Crimea ‘a land grab’ (as did the British Foreign Secretary).  Foreign Minister Sergei Lavrov told Kerry that Western sanctions imposed in the wake of Russia’s invasion of Crimea are ‘unacceptable’.  Putin aide Vladislav Surkov mocked U.S. sanctions against him, quipping that he ‘doesn’t need a visa’ to listen to American rapper Tupac. ‘I lose nothing.’  The Japanese Prime Minister has also weighed in to condemn the annexation, and France is considering a punitive cancellation of a delivery of warships to Russia.  RFE/RL notes that just two days before Crimea’s parliament voted to secede and join Russia, Putin had offered an outline of his annexation plan at a press conference – and hinted that the same thing could happen in Kosovo.

Crimea does not have a self-sustaining economy and currently relies heavily on Ukraine for basic services, notes this piece, perhaps explaining why Russia has already delivered its first installment of financial aid to its new territory.  Gazprom is seeking access to Crimean oil and gas deposits.  Under pressure from disgruntled officials, the E.U. may expand the Russia sanctions that are currently in place, but many disagree, including Rosneft head Igor Sechin, who says expanding limitations on officials will worsen current conflicts.  This article suggests that a way of affecting Russia more immediately would be to release oil from America’s Strategic Petrolum Reserve, thereby depressing global prices.  The European Parliament for the first time has released its proposed Magnitsky Sanctions.

Ella Pamfilova has been appointed to the post of Human Rights Ombudsman.  The Central Bank spent more than $4 billion propping up the ruble this week.  Media tycoon Alisher Usmanov has taken a 52% controlling stake in VKontakte, the Russian equivalent of Facebook.

PHOTO: Russia’s President Vladimir Putin addresses a joint session of parliament on Crimea in the Kremlin in Moscow, on March 18, 2014 (AFP Photo/Alexei Nikolsky)